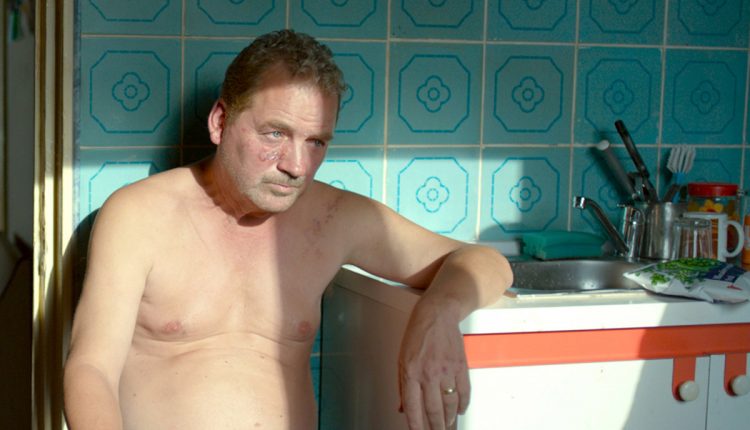 The first floor of the apartment block, through which all tenants must pass, is where the crime took place. On the second floor, its suspect. The third, a potential witness. If the pulpy premise of One Floor Below is enticingly Hitchcockian, its enactment has fattened the delicate humanism of director Radu Muntean, a member of the Romanian ‘New Wave’ which, since 2007’s 4 Months, 3 Weeks and 2 Days, has produced a number of incisive moral dramas where domestic minutia and regional politics are foregrounded within the template of genre.

As in Tuesday, After Christmas (2011), Muntean advances his drama from one moral decision in the life of an ordinary man. In that film, Paul (Mimi Branescu) must decide whether or not to leave his wife for a younger lover; here, Sandru (Teodor Corban) makes the puzzling decision to withhold details of a possible murder from an investigating detective. But as hours pass into days the man begins to wrestle with an intangible feeling of… guilt? Superiority? The (presumed) knowledge that he has protected his family and neighbours from scandal? Sandru’s motive becomes even murkier when suspect Vali (Iulian Postelnicu) starts to befriend his wife and son, and from here, rather than exploring the nature of the crime and its aftermath, Muntean fashions a simmering moral drama around the psyches of two men who (think they) share a secret.

Like Hitchcock’s Rear Window (1954), the ethical impasse of One Floor Below arises from a breach of privacy, and the grievance that even a criminal can feel when his personal space is invaded – after all, murder is an intimate act, and particularly shameful if unmeditated. The scenario might be resolved if either Sandru or Vali weren’t so embarrassed by their encounter on the morning of victim Laura’s death, but their shared transgressions (the former’s eavesdropping; the latter’s misogynist language in a heated moment) shock both men into silence. Sandru withdraws into his routine of dog walking and work, but even as Vali’s insidious visitations disturb the balance of his life, neither man is willing to address the reason for their sudden and unmotivated hostility, instead repeating a reticent pas de deux around the stairwells and domestic quarters of the apartment block.

Muntean, again collaborating with DP Tudor Lucaciu, is highly skilled at navigating the emotional spaces of his characters, and uses the 2.35 : 1 ratio to full advantage. Lucaciu’s shots are wide, but the action is very often contained to their centre, threatening to explode and spill into the margins at any moment, and when tensions between Sandru and Vali finally come to a head, the impact of their clash is even greater for how Muntean subverts our expectation of how he’ll manage the frame. Cut at a lean 93 minutes, the film is also ruthless in its economy of shots, building detail through short takes and an absorbing rhythm from their subtle intercutting with long shots of character activity. There’s an internal logic to One Floor Below which is both playful and at the service of (social and domestic) realism, a remarkable feat upheld by the terrific, naturalistic performances of players Corban and Postelnicu.