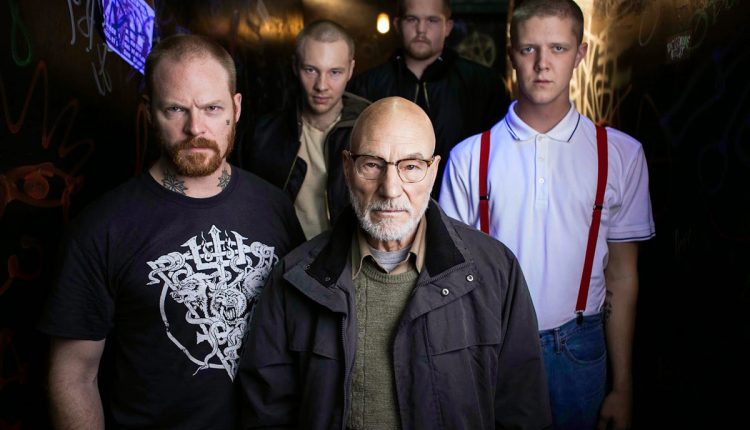 As is Uma Thurman is to Quentin Tarantino, Blue Ruin star Macon Blair is Jeremy Saulinier’s muse. Yet, the director was hesitant to casting him in his latest film. It took a self-taped audition and some temporary tattoos to convince the director to change his mind, reuniting the pair for their third feature film together.

Green Room follows punk band Ain’t Right, who land a last-minute gig at a skinhead club. When guitarist Pat (Anton Yelchin) unexpectedly finds himself in the middle of a murder scene, the band barricade themselves in the green room for protection as they become targets of the club’s vicious owner (Patrick Stewart) and his henchmen. With very few options, the trapped survivors pull together to try and escape.

First of all, the concept of survivors trying to escape a room isn’t original, nor is the idea of fighting your opponent head-on, despite the consequences. The heroes, including gang member Amber (Imogen Poots with a decent American accent), are quite gutsy but at the end of the day, they are easily outmatched and outnumbered, and this grim negativity is consistent throughout.

Additionally, Saulnier has missed several opportunities to build a more solid foundation behind the story, not to mention the complexities of his characters. Once the murder occurs, Green Room loses its way by being too mysterious, providing little insight to the characters on either side of the green room door. Stewart is more of a talker than a doer, losing any evilness to his performance, whereas Macon Blair’s henchman Gabe presents himself as a more emphatic character with little reasoning behind his actions, leaving viewers in the dark.

However, Saulnier effectively builds up the suspense during the first half-hour, using it to build up the likeability of these characters. The survivors’s collective bravery is a refreshing change from the flailing panicked characters from escape films, with Yelchin playing an awkwardly endearing hero. The film makes the most of its confined settings, choosing to make a more visual impact using gruesome violence rather than witty lines and flashy stunts.

Green Room will be having its UK premiere on 14 October at Hackney Picturehouse.