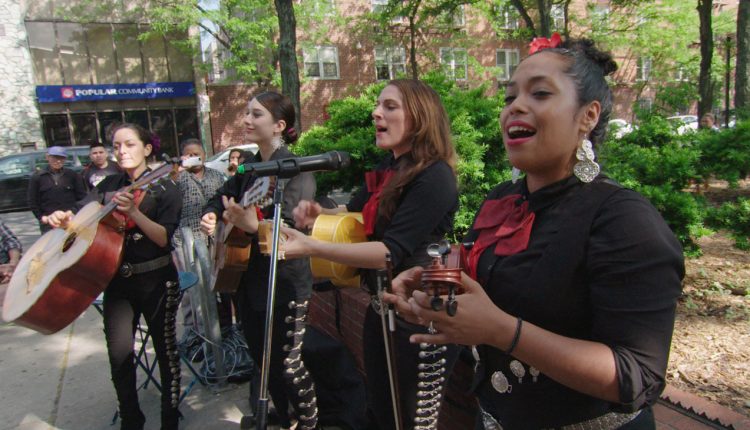 With all of the great observational documentaries on show at this year’s BFI London Film Festival, it’s only fitting really that the master of the form himself, Frederick Wiseman, bring a film to our screens – and ordinarily it would be the film to show all of the others how it’s done. This was certainly the case last year and the year before, with the screenings of At Berkeley and National Gallery – masterpieces both. Not so much this year. This time around, In Jackson Heights, Wiseman’s 40th film, is somewhat left behind by the overall quality of the films around it.

In Jackson Heights takes Wiseman’s usual institutional dissection up to the community level, focussing on the people who strive to make their living in what has become, over the years, one of the most cosmopolitan of New York’s suburbs. Located in Queens, Jackson Heights is home to a thriving maelstrom of immigrants and minorities from all over the world, blending together in a fantastically colourful, musical and joyous amalgamation of cultures and lifestyles. All is not the cultural celebration it first appears though.

Wiseman concentrates his story on the lives of a select group of migrant works and latter generation residents all seemingly struggling with the same problems – Mexican migrants coming to terms with leaving family behind, struggles at the border and keeping a national identity alive in seclusion; Colombian migrants still displaying their love of football while the financial world around them threatens to distance itself; Jewish residents trying to keep their close-knit community close as the younger generations involve themselves more fully in the “western” life; Italian and Spanish shopkeepers fighting the encroachment of big business as rents rise and business dwindles and finally, the LGBT community continuing its fight through marches and demonstrations for equality and inclusion.

As is usual in a Wiseman film, his camera observes but never speaks. It very rarely even moves. Everything is filmed in a static, linear fashion and then edited into cohesion, making it feel as though his camera is in fifteen different places at once. This lends the film a sometimes chaotic feel as we shift and change between groups and locations with no guidance, no captions and no voiceovers or interviews, sometimes watching people talk for minutes before grasping which of the film’s numerous concerns is theirs. And there are many concerns here – as mentioned above – however, the idea of forming communities within communities, each self-reliant but also indebted to the city as a whole seems to the one over-arching theme of In Jackson Heights.

And for the most part, In Jackson Heights works and works very well. It’s relatively narrow social focus, whilst certainly one of Wiseman’s trademarks, takes on a very different tack here due to the expanded cultural nature of that focus, and in some ways this only works to dilute his message somewhat. He covers material that he has covered in the past. In Welfare, Public Housing, High School 1+2 and State Legislature, his keen eye is concentrated to the point of genius. Yet here, he seems to be treating much of same subjects with less concentration, and hence by the time we enter the third hour, we know where we are going and how we are going to get there. Duration is usually one of Wiseman’s key methods, allowing scenes time to unfold naturally before manipulating that time into something more; disparate real-time scenes mixed together to create stories truly from life. In Jackson Heights he uses time in the same way but many of the stories it tells are the same.

For the first time in many years I’ve found myself disappointed by a Wiseman film. This is a trifle unfair, obviously, as In Jackson Heights is still a fantastic document – one that shows us an unfiltered look at the modern life experience of people we share that life with, people whose struggles with the corporate machine and the convoluted nature of cultural integration are different to our own only by virtue of geo-politics – but I think it is mainly down to the fact that in the past he has set standards so high, for himself and for other documentary makers, that inevitably there would be a film that couldn’t quite live up to them. And given that this year we have films like Hand Gestures and the monumental Park Lanes at the festival, In Jackson Heights, as much as it pains me to admit it, is not the standout documentary of the year. It is still a very good one though, and shows that the 85 year old Wiseman is just as infatuated by the world around him as he always was.

In Jackson Heights screens at the 59th BFI London Film Festival on the 10th and 13th October as part of the Grierson Award Documentary Competition.