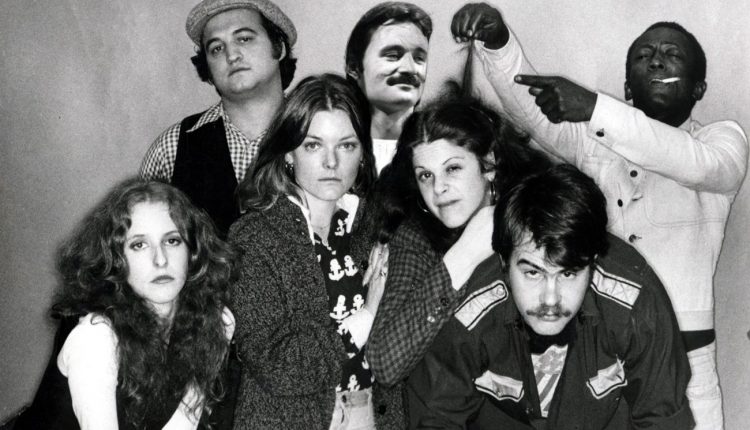 There are a few American comedy institutions – long-running television series like The Simpsons and companies like National Lampoon – but none of these seem to have the endearing attraction for the American people, or the sense of local colour and tradition as we’ve seen in forty years and counting of Saturday Night Live.

Live From New York!, the new documentary from Bao Nguyen, an accomplished but relatively unknown Vietnamese filmmaker, promises to take us behind the scenes of this incredible American television phenomenon, showing us just how the show has managed to not only stay funny, but stay relevant too.

And to this end Nguyen has amassed and assembled, very smoothly indeed, an amazing array of talking heads from all eras of the show, some backstage and show footage and a fairly liberal helping of news footage showing the various targets and effects of SNL’s particular brand of political satire. There comes a point though where this latter aspect of the film seems more important than the people behind the satire, leading me to wonder just what the film is trying to say.

But to begin though, as the film does. At the beginning. We are given a brief portrait of the first cast, a motley company pulled together by producer and creator Lorne Michaels in what was, at the time, something of an experiment – a live weekly comedy show. The details of this beginning are rather sketchy in the film, despite there being a wealth of material available. The interviewees seem more concerned with what was happening outside of the studio than in it. And as great as it is hearing from Chevy Chase, Jane Curtin and Garrett Morris, it’s just a shame that the picture can’t be completed – John Belushi (many people’s favourite cast member, but also the most tragic – his story is a film on its own) is dead and Dan Ackroyd and Bill Murray are conspicuous by their absence.

Throughout we see later alumni, Andy Samberg in particular, along with Tina Fey, Amy Poehler, Jimmy Fallon and Dana Carvey discussing what they see as being the legacy of the show, but after a while it all becomes a little redundant. Somebody says Tina Fey’s Sarah Palin is good, so we see Tina Fey as Sarah Palin – quite a few times. And then some more. We are never told why Sarah Palin was such a ripe target for satire, merely that she was, and this is then tempered by seeing her on the show herself – so it’s satire, yes, but not so much that they actually want the target satirised. Merely tickled a little. The same goes for Will Ferrell’s George Bush and Gerald Ford. Who came first? The Joke or the president? It doesn’t really matter, it seems. Or if it does, only the cast really knows and, though the thrust of this film is SNL’s endearing legacy, perhaps we should know too, given that, surely, the lasting legacy of SNL will be more than a few political jokes. Wayne’s World is flashed on screen briefly and then neither it nor Mike Myers are seen again, and there is no mention of shows it went on to spawn or influence.

This is a very brief historical overview of the show and as much time is spent on the controversies and legacies as on those responsible. The racial make-up of the cast is called into question – Garrett Morris recalls being passed over for the role of a doctor because he was black, but not very much is made of this (the great Richard Pryor hardly gets a mention) during this time, and it is only when we see Leslie Jones deliver her now-famous monologue about her sex life during times of slavery that we get a real sense of the progressive nature of the show. Everything up to that point seemed like slight nods and weak jokes, or at least that is how we’re shown it.

Likewise the gender issue is brought up briefly, and we’re given two different takes on it. Julia Louise Dreyfuss is very honest, describing the show as the sausage party she thought it was, whereas Tina Fey merely passes over the question as a matter of casting. Jane Curtin and Gilda Radner are not really asked to weigh in on the matter, which is a pity.

So, having made it fairly clear that Live From New York! is not so much interested in the show as it is in how it affected the political and social landscape, it makes perfect sense that so much time is given to Rudolph Giuliani, both in contemporary interview and archive footage, and the effects of the 9/11 attacks on the show and New York comedy in general. This is a very important aspect of the film, no doubt, but it does have the very odd effect of reducing forty years of fantastic comedy history to one incident and how Lorne Michaels was allowed to react to it.

And therein lies, I think, the fundamental flaw with Live From New York!, and that is that in trying to be entertaining and incisive in showing us beginnings and consequences, something of the original anarchic spirit of Saturday Night Live has been lost in the process, leaving us with a film that is part documentary, part DVD extra. The documentary parts, those about the nature of comedy and its effects on the world are too slight and superficial to be any more than merely interesting; and the DVD extras element, the history of SNL and the people that made it so special, is nothing that hasn’t been seen before. Even the contemporary interviews fail to really shed any light on the genesis of an era-defining show.

That’s not to say this is a bad film, despite what I’ve written above. I actually enjoyed it very much, though it does seem more like a reminder of what made SNL so good, not an investigation into it, and that seems a shame for an 81 minute film. If you are familiar with Saturday Night Live, there will be nothing really here for you, and if you have no idea what it is, you may be left wondering what all the fuss is about. It is only really in the last ten minutes or so that we get a real sense of the work and adrenaline that goes into putting on a live television show week in and week out, and it is no surprise that here Live From New York! really grasps the subject and is at its best. It’s a pity this energy is only unleashed at the end.

There are indeed many great and memorable Saturday Night Live moments, and it fully deserves its reputation as a career-making platform and a fine proponent of quality comedy in its own right. But in order to fully understand why this is, one could do a lot worse than reading the fantastic book of the same name by Tom Shales and James Andrew Miller. And worse, unfortunately, the film of Live From New York! is.

Live From New York! screens at the 59th BFI London Film Festival on the 10th and 11th October as part of the Laugh strand.