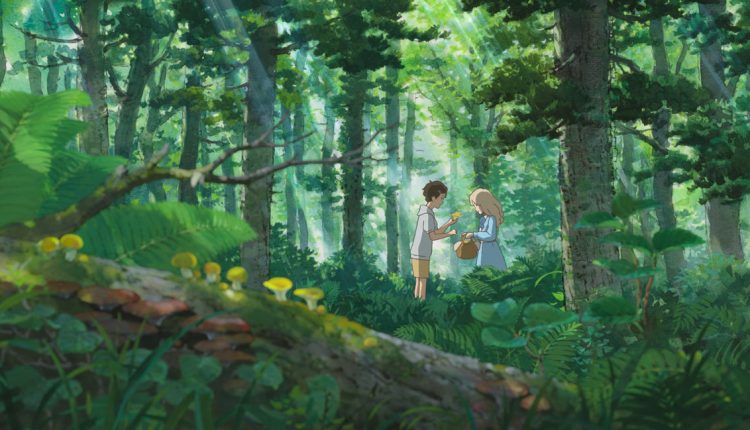 In 2014, Japanese animation giant Studio Ghibli announced that it was taking an hiatus after director Hayao Miyazaki retired.  Their latest film, directed by The Secret World of Arriety director Hiromasa Yonebayashi, is a bittersweet release as it is potentially the last film created by the studio.

Based on a Joan G. Robinson novel, When Marnie was There focuses on 12-year-old Anna (Hailee Steinfeld in English dub), who travels from Sapporo to the country to recuperate from her asthma.  After stumbling across an old, seemingly abandoned mansion, she starts dreaming of a blond girl living there.  Rowing to the house one night by boat, she encounters the girl from her dreams, Marnie (Kieran Shipka), and the two become friends.  However, as their friendship intensifies, Anna discovers that meeting Marnie was more than a coincidence.

At first sight, it feels like the wrong film to bookmark the end of Studio Ghibli.  Miyazaki’s The Wind Rises would have resembled a more poignant celebration to honour its outstanding filmography, so this story feels out of place. It also fails to instil the same kind of magic from similar Ghibli features and the plot is unnecessarily confusing as it continuously shifts between dreams and reality without comprehension.

The film’s overall message seems to have been lost as well.  There are underlying themes such as friendship, loyalty and acceptance, but they end up being undeveloped or in some cases, rushed and never revisited.

However, the animation is intricate and beautiful, and Marnie and Anna fit in with the studio’s long-standing tradition of endearing female protagonists.   The friendship between the two is sweet and emotional given their common pasts, even though they seem to represent polar opposites of each other; Anna is reserved and observant, while Marnie is outgoing and a bit of a fantasist.  How they are connected is intentionally unclear for the majority of the feature, so their story feels too drawn out to accommodate the 103-minute running time.

Overall, When Marnie Was There is lovely to watch but it fails to provide the celebratory ending that Studio Ghibli deserves after 30 years of animation.