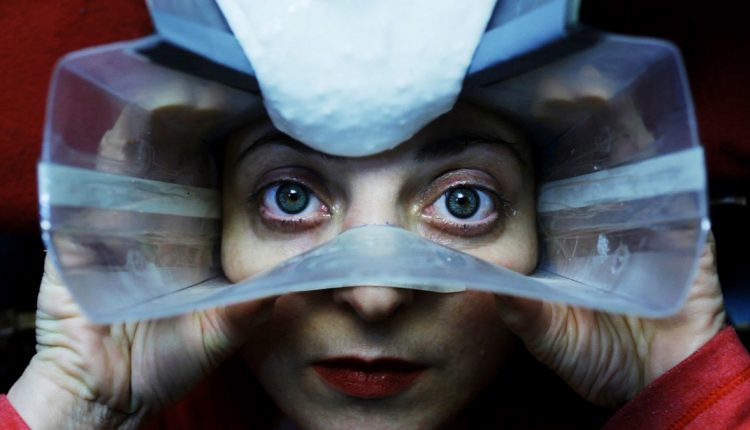 Nicola Costantino: The Artefacta is the new documentary film from Italian filmmaker Natalie Christiani and follows in the tradition of The Artist is Present and Making Waves in showing us professional portraits of controversial artists preparing large works. But whereas The Artist is Present showed us an artist consumed with “the work”, and Making Waves showed us the celebrity and business of art, Nicola Costantino: The Artefacta gives us a far more personal film, and is all the better for it.

Nicola Costantino is an Argentinian visual artist, daughter of a fashion-designer mother and surgeon father, and we learn right from the off that the effects of her childhood will be carried with her through her whole life – from her fascination with the mechanics of bodies to her desire to sculpt bodies themselves. She discusses all of her methods and influences in a voiceover that sometimes matches what we see on screen, and sometimes meanders off into weirdly melancholic and theoretical musings. Nicola Costantino: The Artefacta is constructed out of odd tableaux, some archival, some strangely mundane, all however illustrating her devotion to her country’s legacy and her own artwork.

Politics and memory and this idea of legacy play a large part in the film, and we see Nicola’s obsession with Eva Peron inform her work and her practices, both visually (in the many recreations of moments, clothing, situations) and idealistically. We follow her, in the film’s only narrative through line, as she prepares her complex video and installation work for the Venice Biennale, a work in which she herself plays the part of Evita, examining notions of memory, royalty, reality and the role of women in the creation of political myth. There’s an astonishing amount of detail that goes into this work, and we see Nicola hard at work on all parts of it, while the voice-over gives us a deeper insight into her desires to produce art and her views of herself as a person. The images and the words mesh together here beautifully.

The film overall does indeed come together beautifully. I’m not certain how much input Nicola had in the making of the film, but there is very definitely an artistic intuition at play here. Though on the review film it is hard to decide what the final film quality will be, there are shifts from digital to processed digital to archive film and it all complements and intrigues. Shots of Nicola’s works completed, however, are few and far between, partly because some of them seem to be deeply personal, ongoing performances, and partly because the finished item is not really Christiani’s concern here. The production tableaux I mentioned earlier are wonderfully shot. Costantino’s slow, methodical, deliberate movements in her Baroque surroundings are matched by slow, sweeping, deliberate camera movements. There is something of Greenaway in the way these shots are composed; carefully, with an astute attention to detail and colour, we are drawn into Costantino’s world of ethereal and bizarre visceral beauty.

Like any good biopic of any good artist, Nicola’s major works are explored in some depth, and though the only view we are given of her work is her own (which makes a nice shift really – so many biopics very quickly fall into mass back-slapping sessions) she is wistful and honest in her appraisals of who she is and what she does. And this makes sense, because, her taxidermy and animal-based works aside (her large pigballs are a thing to behold), she IS her work, is in every piece and in many ways every piece is about her. More-so than most artists, Nicola Costantinos is heroically self-absorbed. We are not shown her childhood home, we are shown her in it, as indeed she is in every shot; she creates soap made from her own lipo-suctioned fat (in order that she be literally in her work) and in the most egregious example, she creates an artificial analogue of herself as she prepares for childbirth that accompanies her whether at work or repose. This analogue is dressed, spoken to, filmed and, eventually in a move of some naivety, pushed off a bridge in a wheelchair. Even when we are treated to a Borgesian tale at a dinner party it is she that delivers the words and when some gauchos show her how to slaughter a cow, in the film of it she is wearing a red dress and make-up, performing even this instructional event for the ever-present camera.

This is not a problem though, as she is a pleasure to watch at work and at home – she is intense, photogenic and oddly compelling in an otherworldly kind of way. I imagine this otherworldly aspect would be heightened further were it not for the subtitles (necessary, I know, but they function not only to translate, but also to unfortunately interrupt the flow of the film), but fortunately what we hear is just as important as what we see. This sense of quiet observation is carried into the filmmaking further – there are no interviews, no off-camera voices, no talking heads, the only voice heard is Nicola’s own, and this truly makes the film about her…wholly about her.

Nicola Costantino: The Artefacta is a fantastic portrait then. It may not appeal to everybody – it is very acutely focussed and Nicola’s artworks may be a little “out there” for some, but as an investigation into the artistic method and the role the artist plays in it, it works wonderfully.

Nicola Costantino: The Artefacta screens at the 59th BFI London Film Festival on the 17th and 18th October as part of the Dare strand.