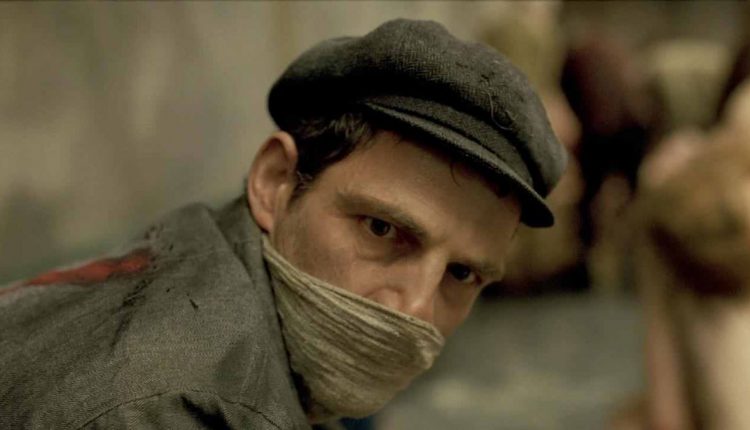 With remarkable confidence for his feature debut, László Nemes has located a cinematic language to grapple with the urgency of history and its irrevocable course. Perching his camera onto the shoulders of an emotionally paralysed Sonderkommando (Géza Röhrig), Nemes threads several tiers of fictional narrative into the morning before a documented revolt at Auschwitz-Birkenau (one of the three death camps visited in Shoah), where on October 7th, 1944, a concentrated alliance of Polish and Hungarian Jews attempted to overthrow the German guard; their effort failed, and more than 200 interns were executed.

This coalition between invented action and accounted scenario is bracing, and Nemes, along with DP Mátyás Erdély, bolsters its effect with an unflinching POV, as their camera follows Saul in a series of long takes observing the processes and procedure of one day/night cycle in a death camp. The effect, rather than an exercise in endurance, is of being immersed into a 360° environment where time is suspended entirely – there are no clocks on the walls, and no windows; duration is felt only by the internal rhythm of each sequence of movement.

As Saul, the poet Röhrig is extraordinary, and as he searches for a Rabbi to bury the dead boy he claims as his son, his burning eyes can barely conceal a suffocated guilt and self-loathing. With little spoken dialogue, Röhrig manages to communicate the hell – the stench, the heat, the texture – of labouring in a gas chamber, and almost thirty minutes into the picture, after he’s disposed of one group of Jewish victims, and Nemes’ has tightened the focus on his lens to create a sensation of nausea and asphyxiation, Saul re-emerges outside, and I almost broke into tears. Not for the cumulative horrors witnessed prior, but for the fact that it was daylight, the air felt cold, and it was possible for Saul to once again draw clean breath. It’s uncommon to feel so much empathy for a character so remote, so unknowable, but Röhrig embodies the part with unbearable vulnerability and remorse.

Nemes was a protégé of the Hungarian auteur Béla Tarr, but the extent of the master’s influence over Son Of Saul has been overstated; trivia bastardised into sophistic analysis. Where Tarr’s (late) cinema uses duration to put us in mind of time, Nemes involves us in space, a vital differentiation which also affects the tone and texture of each director’s work. Tarr’s long takes, and the camera motion within them, were developed in response to the sentence structure of László Krasznahorkai, whose novels inspired the films Damnation (1988) to The Turin Horse (2011), a loose pentaptych of Hungarian lore and noir which also inspired Tarr’s shift from a maximalist colour scheme to severe black and white. In contrast, Nemes’ aesthetic responds to environment, and the historic architecture bordering his story. He uses hot, natural colours as a visceral counterpoint to the gas chambers aphotic interiors, knowing that monochrome photography would have preserved these images in a ‘safe’ past, while in colour they shock and absorb, liberated from the context of fusty college books.

Nemes’ technique has more in common with the work of Miklós Jancsó and Tamás Somló, who as director and DP produced the masterpieces The Round-Up (1965) and The Confrontation (1969), where a traveling camera is used to demarcate space and forge political alliances, while focus addresses power dynamics in geometric structures. Where Jancsó used colour to separate political factions in his films, Nemes allows us to identify characters and their political/ideological ranking by uniform, and his camera follows the same conceptualisation of space, which always keeps an enemy or ‘other’ in view, even as the compositions become longer and more intricate.

While many Holocaust dramas can be accused of sentimentalising the Final Solution, and others – like Uwe Boll’s Auschwitz (2011) – are charged with naked exploitation, Nemes has managed to craft a film equally sympathetic and harrowing, whose impact lingers long after its final, highly symbolic frames.