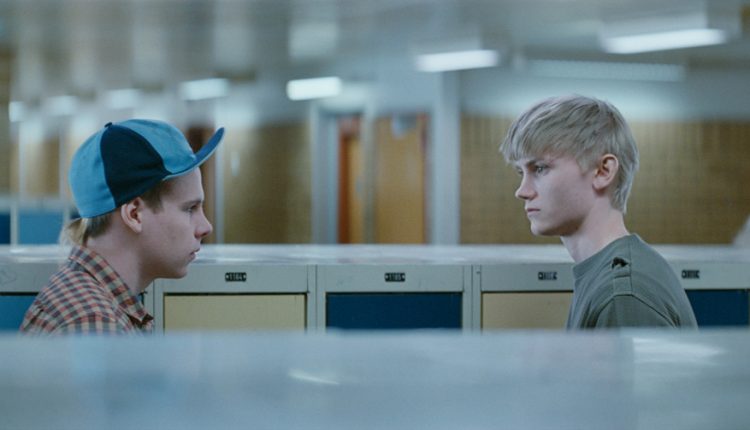 Two years after an intimate tragedy shot tremors through a rural Swedish community, teenager John (Ulrik Munther) is released from a high security institute, and embraced by his father. The wide shot in which this happens could represent The Here After in microcosm – an attempt at warmth and reconciliation viewed in cold, foreboding static. Held for several minutes, it’ll be a warning to discerning viewers that what awaits is a Hanekeian exercise in studied dramaturgy, but writer-director Magnus von Horn profits from a bristling, barely repressed energy coursing through the film’s otherwise placid climate, locating a visceral counterpoint to his austere Cinemascope compositions.

It’s Horn’s feature debut, following two credibly researched shorts (Echo, 2008; Without Snow, 2011) about violent teens forced to confront the monstrosity and banality of their crimes. But here his purview expands, and, leaving John’s offence unspecified, he builds a portrait of a stunted community suddenly re-awoken when the ghost of a moment returns in corporeal form. Horn’s camera regularly perches on John’s shoulders or stalks him from behind, and DP Lukasz Zal’s (Ida) use of shallow focus creates a foggy aura of confusion and alienation around our protagonist, contrasted with the sharp focus used to delineate any space which he is seen to ‘invade’. This simple technique provides Horn a distance from which he can subtly penetrate the moral nucleus of the town, building empathy for characters on either side of its moral axis while also challenging their individual behaviours.

Shooting on 35mm (but projected from a DCP at the LFF), Zal uses his 2.35 :1 frame to isolate John in challenging environments, and conjures a doleful mood through a palette of commingling blues and greens (also the binary shades of Munther’s eyes – he’s a pin-up pop star in Sweden). As in Ida, Zal’s skill with negative space, and how it informs (or withholds) emotion is fascinating, constantly pitching attention from one side of the screen to the other, and as Horn cleaves between landscapes and tight close-ups, a rhythm subtly emerges to afford the film balance (but here the visual dynamic is horizontal, where Ida’s was rigidly vertical).

Boyish and mercurial, churning with both remorse and animosity, Munther’s face is a landscape of its own, and his performance remains brilliantly inscrutable even as details of John’s crime become clearer. Playing his long-suffering father Martin, Mats Blomgren is also terrific at portraying how a moral anxiety slowly eats away at the love for his son, and we finally come to question whether he’s protecting John from the outside world, or vice versa.  When this question is finally addressed in the film’s third act, it’s to Horn’s great credit that an ambiguity still resides in the aftermath.

The Here After is a commanding debut, but perhaps too reticent to transcend the frequented parameters of its concept – in recent years (even recent LFF’s) The Hunt (2012) and We Need To Talk About Kevin (2011) have pushed into similar themes with greater authorial charge and visual wit. If Horn’s camera catches a lot of detail, its deliberate inactivity still feels drawn from the template of bolder films in the existing ‘slow cinema’ canon, and the slick professionalism of their arrangement can make events feel overly academic at uneven intervals. A problem with many first features at this year’s LFF – including Michael Larnell’s Cronies and Eva Husson’s Bang Gang – is their cautious proficiency and neatness, while each film would benefit from unashamed evidence of youthful over-ambition, pretentiousness and crudity to make their worthy images come palpably alive. The Here After, for all of its impressive calculation, still feels like it’s holding back a voice.