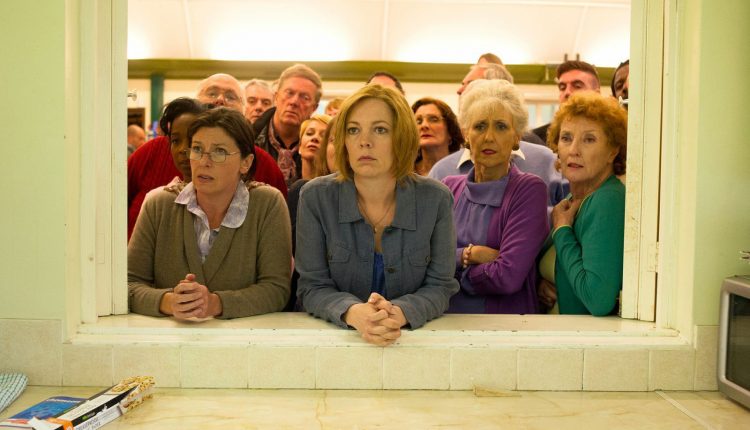 Musicals are a hard genre to get right and when they are combined with another genre, it can make or break a feature.  So, when a musical written by Alecky Blythe and directed by Rufus Norris opened in 2011 in London’s National Theatre, it did raise some eyebrows as it is based on the Ipswich murders that took place between 2006 and 2008.  Regardless, it received unanimous praise and won Best Musical at the 2011 Critics’ Circle Theatre Awards.  Now, a film adaptation is hitting the big screen.

London Road follows the residents on Ipswich’s London Road during the intense media coverage of the town’s serial murders and subsequent trial of local resident Steve Wright, as well as how they deal with the media attention of their neighbourhood.

First of all, the subject matter is quite bleak for a musical.  While most productions in the genre are bright, colourful and cheerful, seeing the characters voice their fears and paranoia over someone in the community is morbid.  However, it is because of its depressing background that makes this stand out as a musical.

Using recordings from real-life interviews with members of the media and local residents at the time, all the lyrics are written in verbatim.  Combined with the surprising vocal strengths of its great cast, ranging from Olivia Colman as concerned neighbour Julie to Tom Hardy, a taxi driver with an interest in serial killers, the lyrics convey more than emotion – they provide an insight of everyday people in the middle of a media circus and inner thoughts that most would tend to keep private.

Overall, London Road is a refreshing change to the murder mystery musical, taking its grim roots and transforming it into an appealing, different and challenging piece of work.

London Road is out in UK cinemas on Friday 12th June.