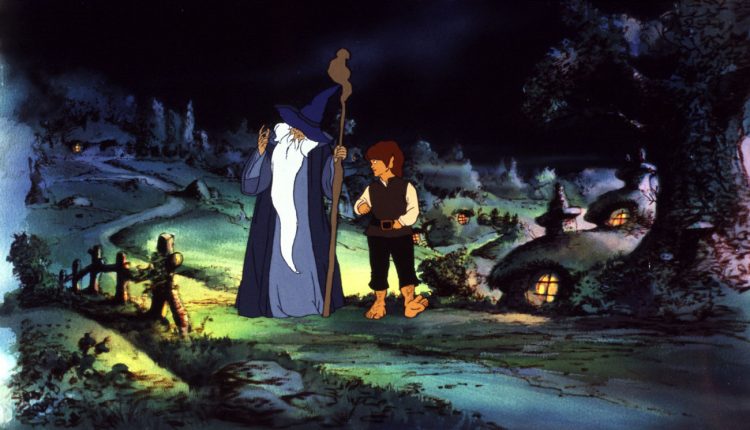 As flawed as it is ambitious, animator Ralph Bakshi’s attempt to make an epic movie from The Lord Of The Rings may have left viewers with a rough, unfinished product (it all ends rather abruptly after the battle at Helm’s Deep), but it stands up as a damn fine take on the familiar material. In fact, knowing just how much screentime was allocated for the Peter Jackson movies, it becomes easier and easier to see how well done this animated effort really is.

For the benefit of anyone who somehow doesn’t know the story, a small hobbit named Frodo Baggins (Christopher Guard) ends up going on a quest to destroy a very powerful ring that has been left in his possession. Helped by the wizard Gandalf (William Squire), Aragorn (John Hurt), some dwarves, and a few fellow hobbits, he journeys from his home in the serene Shire to the ominous Mount Doom, the one place where the ring can be destroyed.

J. R. R. Tolkien certainly didn’t seem to have any movie adaptations in mind when he wrote his most famous work. It’s a dense, at times uneven (yes, I said it), novel. The fact that the tale eventually became a hugely successful trilogy is a pleasant surprise, but the fact that this animated movie from the ’70s comes so close to capturing the feel and scale of the story, while also including all of the major narrative strands and set-pieces, is nigh-on miraculous.

While Bakshi is the man who gets to put his name at the top of the list, major credit should go to writers Chris Conkling and Peter S. Beagle, the men responsible for condensing so much source material into a script that’s entertaining and succinct, but not insubstantial.

John Hurt is, arguably, the biggest name in the cast, but everyone fits the role that’s given to them. Anthony Daniels is also part of the group, playing Legolas, and Annette Crosbie and Andre Morell both give enjoyable vocal performances as, respectively, Galadriel and Elrond.

Despite it being unfinished and imperfect, the film still holds a strange allure which I think is due, in no small part, to the rotoscoping technique mixed with the traditional animation. I certainly still hold on to the childhood memories of fear that I felt when first seeing the dark ringwraiths (I didn’t know what rotoscoping was at the time, of course, but I knew certain characters in the film seemed different from the others, with the ringwraiths being the most unsettling). Perhaps when watching the film nowadays I still view it with some nostalgia colouring my perception, but I like to think not. I like to think that it really IS a strange and glorious animated epic that reached for the moon and remains full of fallen stardust.

The Lord Of The Rings is screening at EIFF 2015 on 27th June as part of an animation strand that also includes Fritz The Cat, Inside Out, Wizards and more.