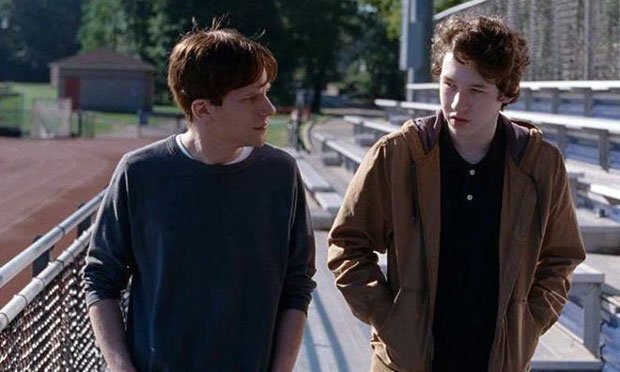 That switch into English can be a real killer, tripping up the best of filmmakers. Norwegian director Joachim Trier, the man behind the brilliant Oslo, August 31st brings a top draw cast and moments of subtle grandeur with him, but he also loses an awful lot of the nuance that made his first two features so damn good. Louder Than Bombs ends up as dysfunctional as the family it zeroes in on, an extremely good film told badly.

The heart of the problem is renowned war photographer Isabelle (Isabelle Huppert). After finally quitting a craft that sent her into the most dangerous places on earth, she died in a local car accident, an irony noted in a brief feature commissioned as part of a retrospective on her career five years later. She left behind three broken men. Her husband Gene (Gabriel Byrne), former actor and now teacher, lives at home with youngest son Conrad (Devin Druid), a difficult teenager prone to deathly silence and the occasional abusive outburst. Older son Jonah (Jesse Eisenberg), a sociology professor and new father looks to be in better shape, but returning to the family home to sort through Isabelle’s old photos, he too reveals a distressing hollowness in his life.

Working from Trier and Eskil Vogt’s screenplay, the family moves though a number of confrontational arguments and revealing flights of fancy as they await an article on Isabelle that will reveal a secret about her death unknown to Conrad. This is not quick release drama; the trio take their time to reach the end destination. In a number of powerful scenes that sometimes touch on the profound, they demonstrate their problems through awkward interaction. Gene works to make Conrad open up to him, usually to no avail. At one point, he swears at his father and puts a plastic bag over his head, a cry of help and defiance in one. The best moments come through Conrad and Jonah. There’s something deeply authentic about their relationship. They’re brothers at different stages of life that remain able to bond over a shared upbringing. A tender tone creeps in as Jonah watches his baby brother dancing. Later they sit laughing at a video of their father in a terrible medical drama.

Outside the here and now, there’s a desperation to reach poetic heights that puts real strain on conventional narrative. The film disappears into voiceovers, reconstructions of the car accident, bizarre dreams, the demonstration of internal powers and even a brief switch to black and white. It reeks strongly of pretention, an art student that can copy style without understanding how to wield it.

Even in the present there are problems. Sub-plots accumulate like neglected rubbish, gradually going stale around the corner of the frame. Amy Ryan enters as a teacher in a secret relationship with Gene. An old girlfriend of Jonah’s resurfaces drawing him into adultery all the more shocking because it’s treated as if it didn’t happen. Even Conrad gets his moment in the sun, stuck in a coming of age drama as he chases the pretty girl who hangs around with jocks. As for Gene, it’s never clear just what he did that made him such a failure as a father.

The story at the centre is such a simple one, a basic tale of an absent parent who couldn’t manage to merge private and public lives, and a left behind partner who didn’t know how to handle the situation. When Louder Than Bombs sticks to this, it’s really rather good. When it moves away it disintegrates. Never boring, often thoughtful and sometimes moving, it’s disappointing mainly because it could have been so much more. Trier has done better, and will do so again. Let’s put this down to growing pains.