Peter Sarsgaard is Chuck, Chris Noth is Anthony Romano, Bobby Cannavale is Butchie Peraino, Hank Azaria is Gerry Damiano and Adam Brody is Harry Reems. If you don’t know the names, although the last one should give it a way, then that doesn’t matter, because this is all about the name given in the title. Miss Linda Lovelace (Amanda Seyfried), arguably the first female superstar of hardcore pornography, thanks to her involvement with the film Deep Throat. 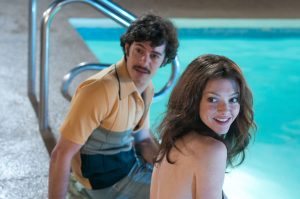 Deep Throat was a film that seemed to knock down barriers. It created queues around the block, apparently, and opened up a window to a world of sex and mature content that has never been closed to this day, despite the sustained efforts of those outraged and offended by it. It seemed to be a good thing, but details eventually came to light that reminded everyone that things aren’t always as they seem. This movie, in case you didn’t guess, attempts to show that truth. 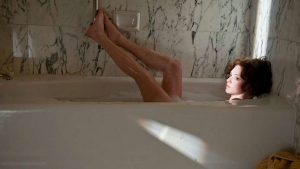 Let me cut to the chase here, Lovelace doesn’t work well as a drama/biopic for a number of reasons. The script by Andy Bellin makes far too many mistakes as the plot unfolds, veering between titillation to tribulation with no conviction in either department. It’s not improved by the direction by Rob Epstein and Jeffrey Friedman, who seem intent on simply keeping the screen busy with celebrity impressions that they expect others to enjoy as much as they do. 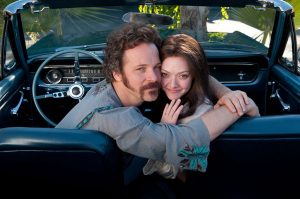 Well, those celebrity impressions aren’t good. Let me emphasise at this point that Seyfried is excellent in the lead role. Her mixture of naiveté and natural allure make her portrayal very believable, especially in the way that her character is manipulated while still a very vulnerable young woman. Sharon Stone and Robert Patrick are both very good as her parents, with the former almost unrecognisable in the first few minutes playing someone so removed from some of her more famous (notorious?) roles. Peter Sarsgaard is suitably untrustworthy and sleazy as Chuck, and Chris Noth, Bobby Cannavale and Hank Azaria just manage to do okay. And the ubiquitous Juno Temple notches up another performance that few can complain about. 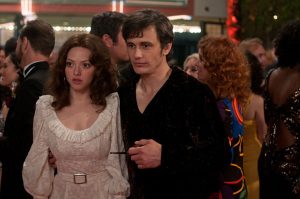 You may read that paragraph and wonder why I take issue with the cast and performances when so many seem to do a good job. Well, this good work is undone by weak performances from Adam Brody and Wes Bentley, although the latter only has one or two minutes onscreen, and the horrendous decision to cast James Franco as a young Hugh Hefner. I like Franco, I really do, but he’s not the man to go to for every job, and he’s certainly the wrong choice here. It’s a choice that takes you out of the film and unbalances the whole thing.

There ARE other positives I mention, such as Debi Mazar in a small role, but almost all of the pros and cons stem from the casting of the movie. That’s it. The rest makes very little impact, which shows how weak both the script and direction are. I can’t help feeling that Linda Lovelace, as always, is still due much better treatment.

Lovelace hits shelves at a store near you on December 23rd. The Blu-ray also contains a featurette entitled “Behind Lovelace” which is well-intentioned, but empty. Matching the main feature perfectly.