Let me first start out by saying that I have not read the book on which this flick is based. I am aware of how popular and loved it is, so I understand some of the backlash it received simply based on the fans expectations (believe me, if anyone other than me gets to make a Catcher In The Rye movie, I’m going to have my own $.02 to throw in about it). So I’m approaching this review solely as a guy who knew nothing about this story other than what was presented to me in film form.

With all that being said, is it a good flick? I think so. It’s certainly not perfect and even though things do not fully tie together, I still believe there is a lot to admire about Peter Jackson’s efforts here.

The plot of the film centers around a 14 year-old girl, Susie Salmon (played very well by Saoirse Ronan), who is growing up in the suburbs during the 70’s. Her life is cut abruptly short when she is murdered by a very disturbed man living in her neighborhood and she spends the majority of the flick narrating to us from a place called “the in-between”, which is a sort of limbo-esque waiting station for people who have not fully crossed over to the other side.

Now I’ll come right out and say this: the biggest reason to see The Lovely Bones is for the performance from Stanley Tucci. From his carefully measured but awkward demeanor, right down to the cadence in his peculiar voice – this guy is the ultimate creepshow. 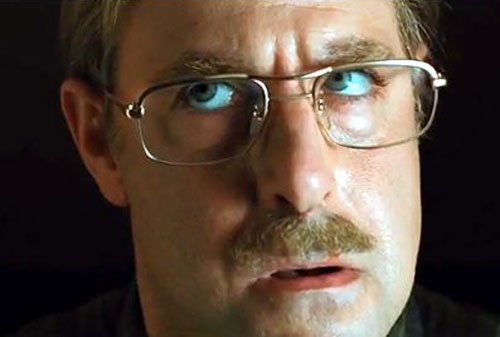 This is one hell of a scary character. A self-proclaimed hunter and outdoorsman who hides behind the guise of an unassuming everyman, but peers out from behind the curtains of his home to watch the neighborhood kids walk to school every morning. It’s just a well executed and terrifying portrayal of a real life monster and all of the best sequences in this film involve him, including an incredibly tense moment where he comes home and realizes he has an unexpected guest somewhere in his house.

The murder in the film itself is handled extremely well. I was grateful that the specifics of what happened were mostly left to the imagination and I really like how Susie escapes from the scene only to realize soon after that she actually never did get out of the underground bunker that she was lured into.

My biggest problems with the movie were pretty simple. First off, the relationship between Susie and her crush, Ray, was exceptionally cheesy (“You are beautiful, Susie Salmon.”). I’m sure what we got in the flick was an abbreviated version of their romance in the book, but as it stands it felt really goofy and probably should have either been handled with more care, or left out completely. I also thought some of the scenes in “the in-between” were somewhat unbalanced. Sometimes “the in-between” was a very dark place where Susie would watch the world from a gloomy gazebo, other times it felt like a retro take on an iPod commerical. It seemed a little jarring and I wasn’t really sure what type of world Susie was supposed to be in. The relationships with the surviving family members also felt “off” at times. Mark Whalberg does a great job as the father who cannot cope with the loss of his daughter, but Rachel Weisz is given a pretty flat role and literally disappears halfway through the movie. Susan Surrandon, Rose Mclver & Christian Thomas Ashdale are all competent as the grandmother and siblings, but again these characters almost feel like abridged roles as they’re not given all that much to do (especially considering the title itself is supposed to refer to the lives and relationships of the people that formed in the wake of the main characters death). It just seems like there must have been some scenes laying on the cutting room floor that would’ve bonded the family closer together.

Overall though, The Lovely Bones is still a good flick that borrows elements from other movies like What Dreams May Come and even Jackson’s own Heavenly Creatures. The cinematography by Andrew Lesnie is often outstanding and I personally think the editing of certain sequences should be pointed out (the post-murder realization, Susie’s encounter with all of Stanley Tucci’s prior victims, the wheels turning in Mark Whalberg’s head as he decides who the actual perpetrator is, etc.) If you’re a diehard fan of the novel, I’m not sure how you’ll react to this adaptation, but for anyone who want’s to see a decent film about life, death and the world beyond – trust me, you can do alot worse.