After the success of the Twilight films, delving into the vampire film genre is a risky move.  Gone are the Hammer Horror films where vamps wore capes and actually fed on people.  In the course of a few years, Stephanie Meyer weakened the gothic horror aspect of the genre by incorporating them into her own vision.  Her efforts essentially weakened the tradition of vampires on film.  But after the moderate success of British fantasy thriller Byzantium (2012), vampires are starting to make a steady return to the gothic horror trend that defined them as a key sub-genre in horror.  Now, Broken Flowers director Jim Jarmusch’s latest offering brings a modern twist in vampire folklore in this moody dark comedy. 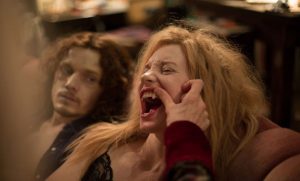 The main problem with this romantic drama is that it essentially follows two lost souls, who belong with each other but are settled nowhere in particular.  As a result, it is easy to forget where you are in terms of the story – if it isn’t the fact that the protagonists are vampires, the film would probably be quite ordinary and, considering the over-simplicity of the plot, the 122 minutes running time is slightly too long.

However, Only Lovers Left Alive doesn’t try and reinvent the sub-genre like The Twilight Saga but instead, brings back the distant and moody back into vampirism.  The protagonists sleep during the day, have fangs and drink human blood, but Hiddleston and Swinton are perfectly cast as Adam and Eve, as they bring a retro cool to their performances.  Wasikowska is devilishly good as the irritating Eve and Anton Yelchin’s offbeat Ian is amusing, as he is seemingly unfazed by Adam’s reclusiveness and reluctance to venture outdoors. In comparison, John Hurt – who plays Eve’s vampire friend Christopher Marlow – feels slightly underused in comparison to his younger co-stars. The dialogue, focussing on the ‘zombies’ of the world (ironically, the normal human beings in the outside world), is witty and deadpan and delivered with a sharpness.  The soundtrack, reminiscent of the Cliff Martinez electro-pop tones of 2011 crime film Drive, is simply hypnotic and it is easy to lose oneself in the ambience – quite fitting for a modern gothic film.

Intense, darkly amusing and with a killer couple in Swinton and Hiddleston, Only Lovers Left Alive proves that vampires aren’t just about the fangs and blood but a never-ending life – and how you live it.

Only Lovers Left Alive is out in UK cinemas on 21st February 2014.