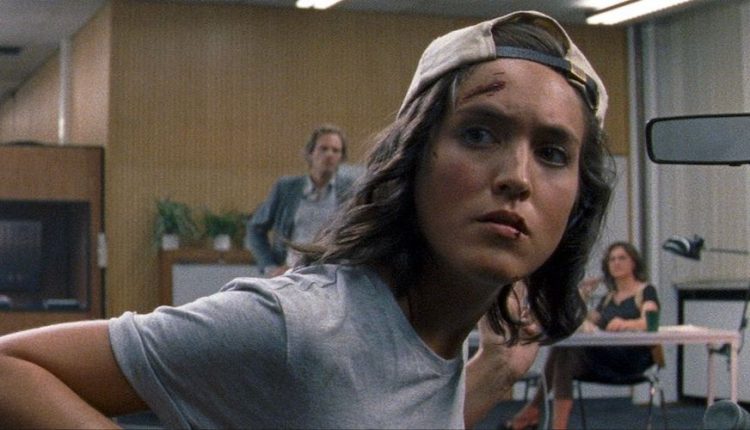 German writer-director Tilman Singer is at the helm of a hell-raising and hypnotic horror showcase in a feature debut that sizzles, rattles, and bewilders. Singer’s Luz may be indescribable to pinpoint as far as demonic possession Euro-goosebump thrillers are concerned. Nevertheless, one thing is certainly clear–Luz is an atmospheric frightening flick that registers with heart-pounding intensity. Vastly experimental in its bizarre supernatural skin, Luz seizes every opportunity to enrapture you with its surreal chills and thrills.

No doubt that Singer has peppered his German-based frightfest with his brand of off-the-wall gruesome flourishes that mightily contribute to the demonic possession genre. Past spooky spectacles such as The Exorcist, Rosemarie’s Baby, and Possession have greatly provided the fearful fodder in elevating this aforementioned genre to new heights of twisted imagination. The verdict is still out on whether the penetrating and probing Luz should be mentioned in the same breath as those classic creepers. Still, Singer’s perverse pot-boiler deserves its own distinction as an enigma of German horror happenings worth every sordid sauciness of its frenzied frame.

The suspenseful premise involves a Chilean female cab driver Luz Cararra (Luana Velis) currently living in Germany. The invitingly pretty Luz is quite tomboyish in appearance highlighted by a backward baseball cap and noticeable scar on her lips. However, it is her sudden trip to the police station that raises some suspicious eyebrows. Poor and mysterious Luz had just been in an accident involving her vehicle where she was tossed out in confusion. Luz’s ugly incident happened in the aftermath of picking up an old schoolmate named Nora Vanderkurt (Julia Riedler). Some could point to Luz’s unfortunate affair as payback for her past religious indifference.

Elsewhere, a person that appears to be the aforementioned Nora Vanderkurt is in deep discussion with police psychologist Dr. Rossini (Jan Bluthardt) as the twosome gather at a bar where the stimulating talk calls to attention the trials and tribulations of one Luz Cararra back in the heyday of her Catholic school days in Chile. Nora informs Dr. Rossini of her bonding with Luz not to mention their other associate in pregnant classmate Margarira (Lilli Lorenz). The head-scratching accounts of Luz are quite revealing. Nevertheless, Nora has Rossini hooked during his inebriated state.

Upon his return to the police station, Dr. Rossini–not quite feeling like his usual self–confronts Luz and interviews her about the horrific event that took place. What transpires next in the hypnotic exchange will certainly affect the demonic forces that overcome the interviewer and interviewee. The twitchy-provoking rituals that arise in the therapy session between the glazed-looking Luz and exasperated Rossini is something to behold in its transfixing terror of psychological proportions.

Fortified in its grainy and gritty gumption, Luz is perhaps one of the most compelling and complicated creepfests that one will encounter this year or any other year for that matter. Singer’s disturbing take on a possessed cab driver and the rabid woman behind the haunting phenomenon is brilliantly arresting in its morbid execution. Mentally exhausting and puzzling, this horrific hoax hits on all cylinders of its nuanced nuttiness. From the perplexing performances (led marvelously by the spell-binding tactics of the strangely alluring Velis) to the moody theatrics of Simon Waskow’s soothing score Luz is more than a formidable package of soul-sapping carnage. Undeniably, it is an inventive and intoxicating experience at gore-enhanced cinema where the tested limits of demon possessed horror has stepped into a uniquely challenging arena of devilish sacrifice, religious scrutiny, and the sophistication of mind-bending titillation.

NOTE: In German and Spanish dialogue with English subtitles