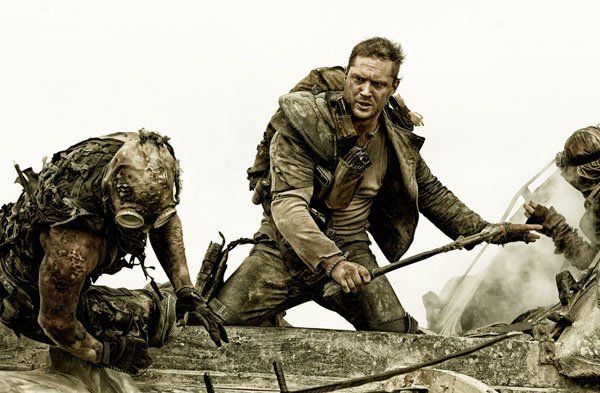 By Chris Knipp Last updated Jul 14, 2015
0
Share
Mad Max better than ever but you may miss the old days

Another Mad Max movie is a good idea, isn’t it? Maybe not for me. This fourth in George Miller’s series has been enormously praised. One reason I can see is the lack of digital manipulation. A lot of the action is real. But I still felt lost. Oh, I’m ready for the post-apocalypse. I’ve seen it so many times. In this one, it’s in Australia, in the desert, and pretty much everybody is a hotrodder and a heavy metal freak. The internal combustion engine still rules and no substitute has been found for gasoline. Most folks have their head shaved and are painted with white power, like Japanese butoh performers. There’s fighting, and everyone’s wildly energetic, though they have virtually nothing to drink, rarely a chance to get any shut-eye. It’s not clear what the diet consists of, but if anybody spots an insect he’ll gobble it.Max isn’t so much mad now, as played by the versatile Tom Hardy, as just shy and quiet. I was quite lost at first. It was hard to spot Tom Hardy behind the metal mask he has clamped over his mouth. But then I remembered him as Bane in The Dark Knight Rises. Same deal, same guy. We in the audience had to put on those 3D glasses — it felt like the various masks people on screen were wearing, and seemed to get in the way of knowing what was going on, with one thing popping in front of another, getting in the way of what one wanted to see, or of the whole picture.
This is not the world of earlier Maxes, in some ways. The superficial appearances — people fighting their way across a dusty plain in improvised vehicles — are the same, but things are more elaborate, and smarter, I reckon. All the bells and whistles and furbelows on the vehicles, to begin with, and the seals and insignias, some of which, we’re shown, are branded onto the backs of people who’re enslaved by a totalitarian master, the most bewigged and masked of all. As a sign of how swell the getups are, Nicholas Hoult had to spend two hours in makeup every morning just to get a big engine-shaped embossed tattoo put on his chest, which we really only glimpse. Charlize Theron has an arm missing and replaced with a glittering weapons-grade prosthetic — doubtless a nod to CGI.

It would be nice to have been handed a little program before going in to watch the movie, as is sometimes done at the opera. Some of the purely onscreen explanations went over my head. (I admit that during very violent episodes in blockbuster films I tend to numb out and go into a mild self-protective coma.) It appears that “tyrannical cult leader” King Immortan Joe (Hugh Keays-Byrne), a kind of decaying monster held together by plastic panels and breathing artificially, controls the known world (or a big chunk of Australia anyway — played this time by Namibia). He controls large quantities of water, which he occasionally lets gush out for a few wasteful, taunting moments. His enforcers are an army of chalk-painted shaven-headed bare-chested “War Boys,” of all sizes, small to large. I thought of William Burroughs. Max has been designated as “a universal blood donor” (I guess his blood is all-type, like an all-region DVD player) and he’s held prisoner to provide blood for War Boy Nux (Nicholas Hoult). And as we see him, Nux is quite recovered, and his enthusiasm is infectious. “What a lovely day!” he exclaims, as he barrels across the desert.

It gets complicated after that (see the special website Wikia for a blow-by-blow plot summary if you wish). Imperator Furiosa (Charlize Theron), a gas convoy driver for King Joe who goes rogue, leads a revolt in her elaborate War Rig, taking King Joe’s breeding wives, who have some picturesque names. They are very white, and look like fashion models. Their excess of softness is offset by the Vuvalini, a gang of gnarly old bike chicks, who join the rebels. Max gets dragged along on Furiosa’s mission and Nux with him. Things go back and forth, but the ladies rule — this iteration in the series clearly on a serious feminist kick. I was troubled by the fact that the South African-born Theron now speaks in a well-modulated American accent, like a proper schoolteacher in suburban Connecticut. It seemed incongruous amid all the rough-and-tumble Aussie voices. Tom Hardy hardly speaks at all, and that in a stifled voice, as if Mel Gibson has been strangled. (He, of course, has been banished since this film was postponed after 9/11.)

The War Boys are wild boys (a Burroughs name) and as they go chasing after Furiosa and her small crew (in search of a green place she remembers from her youth, seeking not “hope,” which she’s warned against, but “reconciliation,” or something like that), one big War Boy War Rig has music, with the Doof Warrior, a rock guitarist floating out in front, his flamboyant twin-necked instrument actually breathing fire. This was my favourite moment, better even than Max washing enemy blood off his face from a tank of baby milk. At some point I realised this was a fantasy. It is a fine detail that when Max has done his job for the ladies, he fades away into the crowd.

There was something very Late Seventies about the whole campy Mad Max idea. Mel Gibson’s original Max was a vengeful cop raging over mistreatment of his wife and child, a pretty cheap and easy pretext for uncivil violence. The sequels were colorful but forgettable. Some may say that theMad Max series “has since had a lasting influence on apocalyptic and post-apocalyptic fiction” (Wikipedia), but the trouble is that there’s been so much of that fiction it’s hard for Mad Max to seem fresh anymore, even when, as here, it really is fresh. But vigorous and inventive and joyously absurd this better fourth version certainly is, and there’s a genuineness to the effort.