The classic Mad Max franchise must be said to comprise proper cult movies. There is a new Mad Max movie on the way; will it be commercial tripe or something akin to the old movies? Almost certainly the former, but we shall see.

The first of the Mad Max movies that I saw was the third one – I was about fourteen at the time, and unlike most people (as far as I know), I have continued to cherish it as a great favorite. I have always considered it a crying shame that Mad Max Beyond Thunderdome is generally regarded as the least of the three, when in my opinion it is by far the most narratively effective and well-rounded installment. It has much more story and much more character than both of the first movies combined, as well as a much more elaborate and interesting series of settings.

After seeing Beyond Thunderdome, I went out and secured the first two movies on VHS. But I pretty much hated the first one – too brutal, and no sci-fi – and the second one never impressed me. The story is admirably straightforward, but unless you like watching leather-clad sadists on motorcycles and dune buggies, and I don’t, then there really isn’t much in it of any interest. 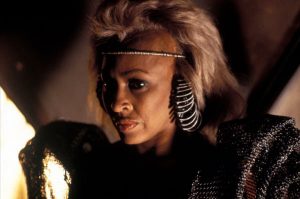 The third movie is a different story altogether. To some extent it is a children’s tale, since Max ends up at an oasis populated by the survivors of a plane crash, all of them children. I still think this is cool. It reminds me enormously of the sequence in the second original issue of the brilliant fantasy comic book Elfquest (published in 1978), where the Wolfrider tribe has to cross a desert and surprisingly discover an oasis inhabited by another tribe of elves, the Sunfolk. 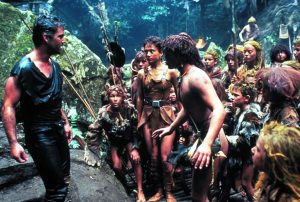 But, before getting to the children’s village, Max arrives at Bartertown, where a leader known as Aunty (Tina Turner) has created a small make-shift civilisation in the post-apocalyptic wilderness. Max immediately gets into trouble, and has to fight MasterBlaster (!) in the Thunderdome. Two men enter, one man leaves. Soon, Max is exiled to ”Gulag”, which is the desert, and happens upon an oasis where a group of plane-crashed children have made their own little make-shift civilisation. In the post-apocalyptic wilderness, yes. With their own partially invented language. The adults from the plane went for help, but died in the desert, so the children have made their own society, almost like in The Lord of the Flies, only not quite as violent (unlike in The Lord of the Flies, there are girls here, too). They have been there a few years; some of the older teenagers are hunters and warriors, and one is even pregnant.

Max and some of the kids eventually find their way back to Bartertown, where they shake things up and flee the place in a dramatic escape sequence. Not that much goes on in the last part of the movie, apart from the escape – you could perhaps say that it’s one of those flicks where the plot sort of stops two thirds into the movie, and then some explosions and chase scenes are appended for good measure. Ah well, works for me. It’s a movie I can keep watching again and again, especially the middle third with the children’s village. There’s some remarkably good acting here and there. Even the end sequence is filled with funny details, and overall the movie has a highly poignant effect on me. I shall never agree that it is a bad movie.

Mad Max Beyond Thunderdome came out on Blu-ray along with the complete trilogy back in August, and it looks better than I would have thought (sadly, though, it has no extras beyond a trailer). I can only recommend the movie to those who may not know it or who dismissed it a long time ago. It’s solid.