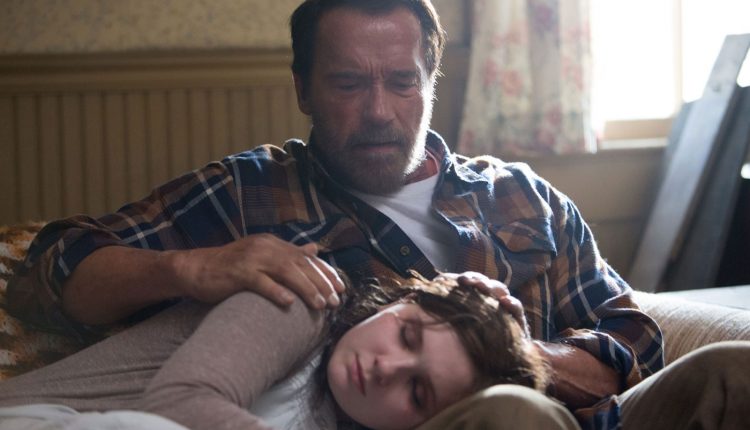 Maggie is the film that you’ve (possibly) been hearing about for some time now. It’s the one that ask Schwarzenegger to actually act. It’s the zombie movie that’s not really focused on being a zombie movie. And it’s pretty damn good.

The deceptively simple story sees Wade Vogel (Big Arnie) picking up his daughter (Maggie, of course, played by Abigail Breslin) from a hospital to take her home. She’s been affected by an illness that has swept through the human populace in a style not that dissimilar to any kind of zombie epidemic. Because, well, it’s a zombie epidemic. But anyone exposed does at least have some time to say goodbye to their loved ones before changing. In fact, many people are bundled off to a quarantine facility, living out their last few days among a crowd of frightened, deteriorating strangers. Wade, understandably, doesn’t want that for his daughter. He just wants to spend some more time with her. Placating the local police, and also heeding the medical advice of a doctor friend, he tries to keep her beside him for as long as possible.

And that’s what Maggie is all about. Time with loved ones. The young girl benefiting from such care and love could be affected with any disease (real or imaginary) and the rest of the film would play out in pretty much the same way. Horror fans won’t necessarily want to flock to this for their latest fix of scares and/or blood, but those who give it their time will be rewarded with a moving tale that also throws in a couple of scenes to show that director Henry Hobson and writer John Scott III know what is usually required from a zombie film.

Schwarzenegger isn’t a particular revelation here, so bear that in mind when/if you hear anyone going on about just how great he is now that he’s suddenly trying to act without relying on his stature. He is, however, good enough to win you over with his performance. And he has at least one fantastic scene (all alone, with the weight of a past life being felt on his broad shoulders) that allows him to show some real emotion. Breslin is very good, although she’s in an awkward stage at the moment between her winning child performances and whatever she may deliver as a more mature woman, and she could certainly do a lot worse than take a few notes from Joely Richardson, who excels as the stepmother balancing a love for this potentially dangerous family member with the safety of her younger children.

While it’s not a great film, Maggie IS a good one. At times it’s very good. Which makes it all the more impressive that this is the first feature from Hobson and Scott III in their respective roles. I’ll be watching what they do next with interest,