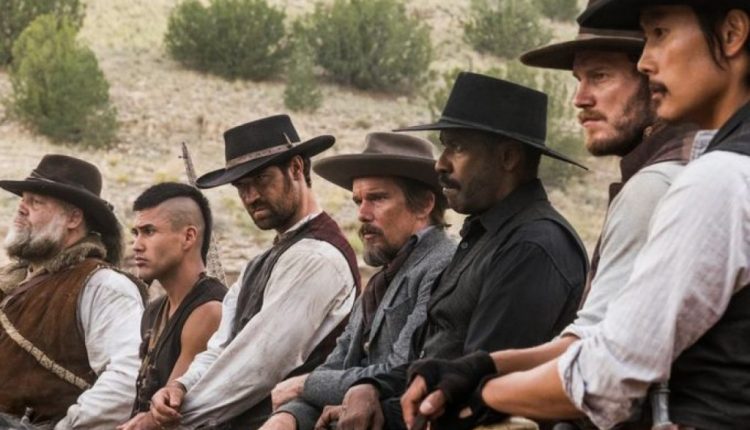 Remaking a movie like The Magnificent Seven is a thankless task. Never mind that it is itself a remake – based on Kurosawa’s joyful Seven Samurai, fans of John Sturges’ classic will automatically revolt against any reimagining through fear it will destroy the original’s warmly remembered legacy.

It’s a mindset that Antoine Fuqua’s explosive retread will do little to change. The Training Day-director may have succeeded in crafting a stylish action movie full of slick gun fights and kamikaze set-pieces, but he struggles to find anything fresh to say about the genre he so clearly cherishes.

The set-up remains largely unchanged. A small mining town is at the mercy of greedy capitalist Bartholomew Bogue (played with sleepy menace by Peter Sarsgaard), who is introduced crawling into a church meeting to torment the townsfolk before killing several of the congregation and burning the whole place to the ground.

Bereft of options, the locals throw their every last penny into hiring Denzel Washington’s lone lawman and his hastily assembled band of gunslingers to help them fight for their freedom.

It’s obvious from the outset that Fuqua has a deep affection for the genre (he cites memories of watching Steve McQueen movies with his grandma as a source of inspiration). From sweeping shots of horses galloping across dusty plains and cowboys riding over the horizon to the saloon bar brawls and Mexican standoffs, every piece of Western iconography is recreated with a misty-eyed reverence that is actually quite charming.

That nostalgic cinematography is infused with the boisterous intensity of a modern action flick. The camera charges through a series of smoothly choreographed set-pieces in a style that often recalls Avengers Assemble for the way it glides between heroes as they dispense justice in their own inimitable fashion.

It’s just a pity there’s very little substance beneath the style. Despite an over-stretched build up to the business at hand, the time isn’t used to flesh out any of the main players. Washington and Ethan Hawke get the deepest backstories, as a man seeking revenge and a PTSD-suffering Civil War hero respectively, but neither is explored to satisfaction.

Meanwhile, Chris Pratt’s roguish trickster and Vincent D’Onofrio’s savage preacher offer plenty of comic value without probing any deeper, while Byung-hun Lee’s assassin, Manuel Garcia-Rulfo’s Mexican outlaw and Martin Sensmeier’s ostracised comanche are defined entirely by their killing skills. Crucially, not one of them has an even halfway plausible reason for joining the skirmish.

Having assembled a commendably diverse cast, Fuqua fails to utilise them effectively. Despite offering plenty of potential to explore different nationalities working together for a common cause, their cultural divisions are instead referred to only by a couple of throwaway gags. The script is crying out for some social bite to make it relevant to our times, but Fuqua seems all too satisfied with simply recreating his favourite movie moments.

Thus, when the final showdown arrives in a swirl of bullets and a body count that will leave even Tarrantino shaken, it feels an oddly emotionless affair. The deep connection we should feel with these self-sacrificing heroes just isn’t there. Fuqua has undoubtedly made an entertaining Western – it’s just nowhere near good enough to justify the superlative in its title.