Artists on film have always been fascinating subjects. Whether we watch them to gain insight into their works or personalities, or whether we watch the excess and absurd pointlessness of it all, what all films by or about artists have in common is that peek they give us into the process of developing an idea into a physical object.

Making Waves is a documentary whose title I think is supposed to work; on many levels, much like the artist it portrays, Marc Quinn (leading light of the now not-so-Young British Artist movement.) As we shall see however, this is a little optimistic. That the film fails to live up to its title is certainly no fault of the maker’s. Indeed, it is a very accomplished film, well shot, well constructed and snappily assembled. It’s problems are a little more, well, personal. The film is shot and directed by Gerry Fox on handheld camera and it serves the purpose perfectly. There is no narration (which would be pointless and even annoying in a film like this) and so we begin at the beginning (we are just dropped into the studio, mid-project) and end 12 months later, with only the Fox’s voice as any kind of non-narrative guide.

We follow Marc through a year of his ever-productive artistic life, watching as he conceptualises, thinks, speaks, exhibits and attempts to paint. He discusses at length his work with various curators, collectors and interested parties; he appears gracious and respected and generally seems (despite his rather dour demeanour) a pretty nice person to have as the subject of your film. Whether he’s an interesting subject in and of himself or whether he moves in interesting circles and attracts interesting attention is another matter.

He attends openings of his work at places as diverse as the Vienna Biennale and the Chelsea Flower Show. He discusses the finer points of Bonsai Trees with salesmen and experts and then sets about making one. He has a way of dealing with subjects and clients that reveals him as a shrewd businessman and as somebody who takes the concept of the “art life” very seriously. Which leads him to numerous projects and meetings with numerous people, both professional and artisan, celebrity and royalty. The instant rapport he develops with an African model covered with tattoos and traditional scarification is both interesting to witness and a little embarrassing, as we see Marc operating not only as both conceptualist and learner, but also as naive aesthete and he of simple sociology. 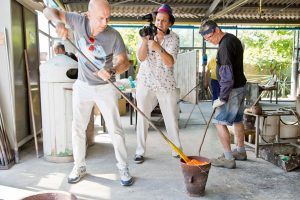 The way Marc talks about his art is deceptively simple -some would say a little too simple. Some would go further and say that Marc Quinn develops a fantastic concept (visually) and has absolutely no way of telling us what it means – further even, perhaps: he doesn’t know what it means. Example: having made (loosely – more on this later) giant seashells, we see him walk along a beach with a shell in his hand; shells are waves of art made by the sea, he tells us. Art is in everything he tells us. Both of which are nice ideas… however juvenile. I think though that, a) they aren’t and b) it isn’t. And I don’t think Quinn is capable of telling us (indeed he doesn’t) what he means and why he means it. With reference to his (?) reproduction Bonsai Tree he tells us that (and I paraphrase, in order that it be more interesting): I suppose you could say nature is one of my themes. And he leaves it there, with no attempt at elucidation or explanation. Which might well, I suppose, be for the best.

This all ties in with my main problem with this film which, as I hinted at earlier, is one of subject and not of concept or product. Marc Quinn, for all I’ve said above, seems to actually make very little art. Sure, he does a few sketches here and there, he splats (in one of his more…shall we say, amateur moments) badly mixed paint onto a tapestry of the London riots… made by a very talented weaver…and so on. The Bonsai Tree? Made by fabricators. The statue of the girl with the body mods? Fabricators. True, he took the photos of her that he needed and helped to apply some of the gypsum to her hands and even helped position the plaster hands on the finished statue. But it seems to me that Quinn (very much like Jeff Koons without the self awareness) has very little hand in so-called Marc Quinn original artworks. This is even addressed in the film at one point, with some throwaway explanation about creation of art and collaboration [for.. on behalf of… with…] his fabricators and builders. It just irks me to see him walk round having people fawn over him and his creations, knowing full well that the artisans slaving away casting his statues and replicating his Bonsai Trees (he did alter the angle of one of the branches, to be fair) probably receive no credit in the exhibition literature, certainly not on the exhibits themselves.

What this all means is that Making Waves is a very peculiar film to watch; on the one hand it’s a very well made fly-on-the-wall documentary about an intriguing character, at times funny and at times serious, at times hard at work and at times artistically reclined…but for me, it’s always infuriating. I used to be a big fan of Quinn’s work, particularly Self (the self-portrait bust made from his own blood, which, like Quinn himself, degrades with time and needs constant attention) but I have since had to question what I think of him and his work; which means, I suppose, that Making Waves is a success (and I’m sure Quinn would claim some of this if he cared) in that the points it raises and the art it exhibits have lead to debate and re-evaluation. Both of the art and of the man. And it always entertains.

Marc Quinn – Making Waves is screening at the BFI London Film Festival as part of the Journey programme.