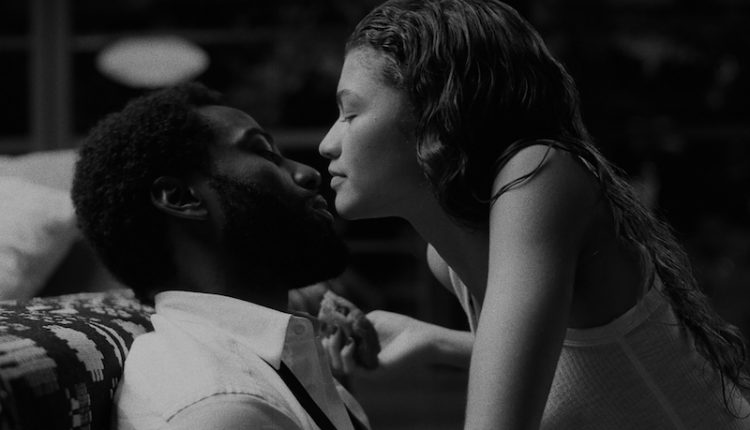 Written and directed by Sam Levinson, Malcolm & Marie stars its John David Washington and Zendaya as the eponymous characters. Taking place in a remote California house, the film focuses on the couple as they evaluate their relationship after returning home from a film premiere.

When we first meet Malcolm and Marie, the film starts off in high spirits. With soul music on loud and a drink in his hand, Malcolm is buzzing after hearing positive comments from prominent film critics. However, Marie’s tension radiates from the start, which sparks intrigue as to her indifference to the evening. As the night goes on, we see that there is more than their relationship that meets the eye.

At the heart of the film is Levinson’s raw and unrelenting screenplay – not only does it highlight the difficulties of being in a couple, but also Malcolm and Marie’s deep-rooted fears. Whether it is a lack of communication or mutual appreciation, these underlying factors ultimately alter the tone of the evening. Marie feels under-appreciated by Malcolm, given the inspiration of his film, while he believes that she resents his success. Using their insecurities against each other, they trade a series of hate-filled monologues that rip you to shreds and reveal the depths of their tempestuous relationship.

But don’t forget – Malcolm & Marie is a story about love, so there is a spark amid their bitterness and resentment. Levinson includes moments filled with humour and passion to break up the repressed tension and help epitomise the love/hate relationship at the film’s core. They also allow him to explore his love for cinema and question on the state of diversity in the industry – causing Malcolm to deliver an astoundingly cathartic monologue about film.

As well as being the film’s producers, both leads are wonderful in their respective roles. They boldly bare their souls on-screen and vehemently deliver Levinson’s script, enabling them to easily command the screen. Washington continues his series of great performances, but it is Zendaya who will shake up the upcoming awards season. She revels in her strongest performance to date as the conflicted Marie, bringing an unmistakeable forcefulness tinged with heartbreaking fragility.

With its soulful soundtrack and monochrome aesthetic, Malcolm & Marie offers a classically stylish platform for the story. Levinson cleverly uses the space to emphasise the couple’s undeniable connection while Marcell Rév’s cinematography beautifully conceptualises the friction between them. As a package, Malcolm & Marie offers a beautiful and brutally honest depiction about relationships – with a couple struggling with each other’s truths at its heart.

Overall, Malcolm & Marie strikes the hearts of its audience. Through its meticulous performances, cinematography and screenplay, it is an unconventional romantic drama that is hard to forget.

Malcolm & Marie will launch on Netflix on 5 February 2021.