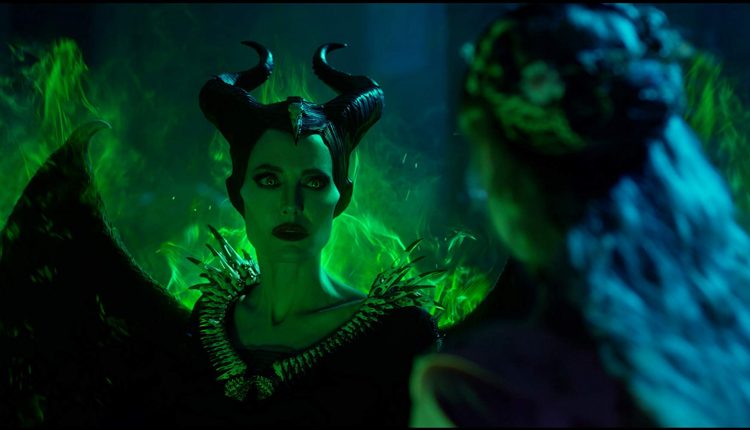 Maleficent remains one of the stronger entries in Disney’s never-ending list of live-action remakes and adaptations. It completely flipped the Sleeping Beauty tale we were told as children. A story of a cruel and powerful witch who cursed a beautiful, young princess into a deep sleep, which was broken by the kiss of a prince. There’s some falsehood in this tale, according to Mistress of Evil‘s 2014 predecessor. It was, in fact, not a witch, but a fairy who cursed the princess. A fairy whose wings had been cut from her back by someone whom she thought had kindness in his heart. This allegory for sexual assault created what I personally believe to be one of the most heartbreaking scenes ever put to film. Darkness would quickly consume her heart and lead to the curse placed upon the child of the one who maimed her. But it was the love of that child that brought light back into her heart, and which lead to Maleficent (Angelina Jolie) becoming the one whose kiss would wake Sleeping Beauty from her eternal slumber.

What writer Linda Woolverton created was a brilliant and revisionist take on a story told time and time again. So it’s hard not to compare Maleficent’s return to her introduction because there was a lot to live up to. And unfortunately, her wings don’t spread as wide.

The narrative focus of Joachim Rønning’s Maleficent: Mistress of Evil isn’t anything new and is similar to basically any romantic comedy movie out there: Aurora (Elle Fanning) and Prince Phillip (Harris Dickinson) want to get married in order to unite their two kingdoms. But both mothers, Maleficent and Phillip’s mother Ingrith (played by Michelle Pfeiffer), have their own reasons why they don’t want the wedding to happen. Their prejudices towards one another are the key tensions of the film. It’s a battle of wills between two evils. A battle you would never expect the magical creature with horns to lose. But a message from the first film lingers: Kindness shouldn’t be determined by one’s appearance.

Just as in the first film, there’s some incredible world-building here. The audience is taken back to the Moors and the kingdom that lies beyond its woods. The filmmakers also expand upon this world, introducing us to more fairies – horned and winged like Maleficent. But this discovery begs more questions about Maleficent’s origin story than answers. Chiwetel Ejiofor’s Conall may not be in the film for very long but he walks us through the history of their kind; however, the question becomes, why should we care? Because through this whole speech, we are never provided answers such as where Maleficent came from, if she had parents, or why she was in the Moors while the rest of her kind had to seek refuge.

The film drones on in a clash between humans and fairies, both despising the other. Colonizer against the colonized, if you will. It’s too on the nose in that sense and it’s a conflict audiences are used to. All of this leads to an over-stuffed battle scene, but whose end manages to surprise.

It’s the star power and performances by its cast that result in the film being a satisfactory fantasy dish. If there’s one way to describe Maleficent: Mistress of Evil it’s Monster-in-Law, but swap Jane Fonda for Michelle Pfeiffer in crown jewels. The conflict between women of such power as Jolie and Pfeiffer is a wonder to behold. Their dinner table strife has a humour reflective of The Real Housewives. The performances of Elle Fanning as Aurora and Sam Riley as Diaval have yet to falter, and while Imelda Staunton, Lesley Manville and Juno Temple are underused as Aurora’s fairy aunts this time around, there are plenty of lesser-known talents like Jenn Murray and Harris Dickinson that bring something fresh to the sequel.

There may seem to be a lot more negatives than positives, but Maleficent: Mistress of Evil‘s superb execution of its recurring themes of identity and familial love keep this series high up in Disney’s repertoire.