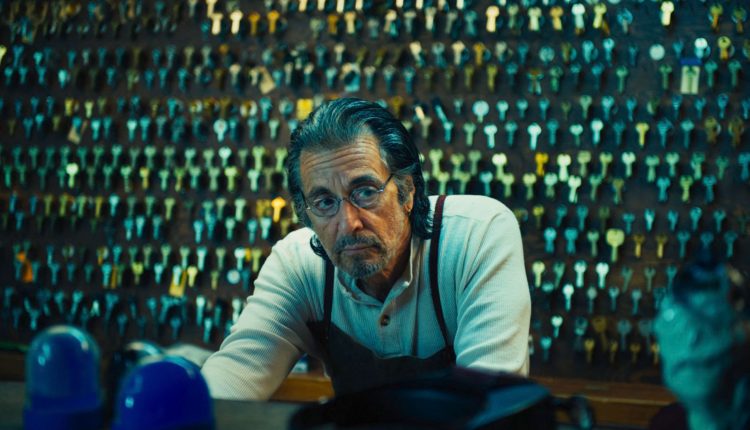 Manglehorn is another low-key movie from David Gordon Green that focuses on one character and his current position in life. There’s nothing new here, and nothing too exciting (those looking to fill a gap in between the likes of Jurassic World and Mission: Impossible 5 should look elsewhere), but it’s all put together nicely enough, and benefits from some great performances.

Al Pacino is the lead character, a locksmith who seems to spend most of his time either worrying about his cat or pining for the lost love of his life. In fact, the latter clouds his mind so much that he is unable to connect with the lovely Dawn (Holly Hunter), a bank teller who seems to have taken a shine to him.

It’s funny how you can get funny looks sometimes when you tell them that you have no regrets. People assume that you’re implying that you haven’t made mistakes or been through tough times. That’s not the case. Those who are happy with their present lot in life have to accept that all of the events before that time, good AND bad, have led them there. But even those who aren’t exactly where they want to be can make their situation better by not dwelling in the past, by not letting regret consume them. And I mention that here because that seems to be very much what Manglehorn is about. The script by Paul Logan portrays the main character as a good man, albeit a majorly flawed one. He doesn’t set out to hurt anyone, he doesn’t just go for easy options, and he has made an indelible impression on at least a few of the supporting characters that populate his world. But his inability to close a door on the past causes problems.

All of the performances are pretty much perfect. Pacino and Hunter are on top form, Chris Messina does well as a son who now seems a world away from his father, even when they are trying to enjoy a civil lunch together, and Harmony Korine is very funny as a motormouth, small-time businessman who thinks that he can help Manglehorn when he actually doesn’t even understand him in the slightest.

Green uses a great array of tricks to complement the script, from overlapping stretches of dialogue to extended dissolves (perhaps aligning the visual style with the inability of Manglehorn to let go of the past). There’s even a sequence in which I thought I noticed four references to Pacino’s most famous past roles, perhaps another signifier from Logan and Green that we all have baggage that can weigh us down or be discarded whenever it’s not needed. Or maybe I was just reading too much into some coincidences that just so happened to all occur in one short space of time.

You can happily go through your life without seeing Manglehorn. Despite the great performances, it’s far from essential viewing and I doubt it will make anyone’s Top 10 list. It is, however, an enjoyable experience that you may find yourself warming to as it goes on. And you may be surprised to find yourself wanting to revisit it when you think about it in the comfort of your own home. I certainly was.