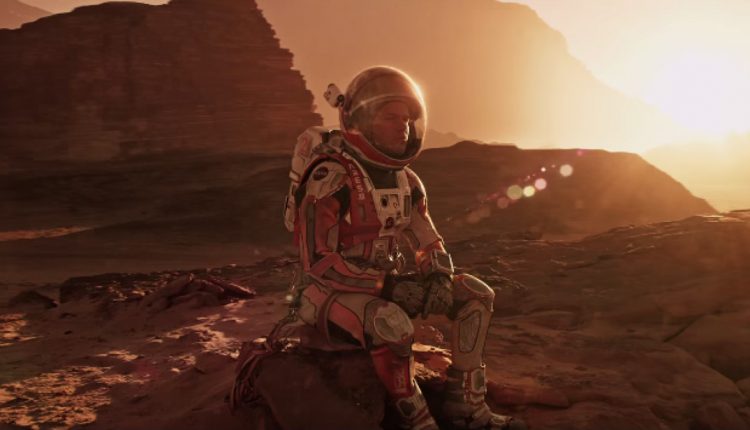 Keep calm and carry on

Would you go see a two-and-a-half hour film about a man marooned on Mars if you thought he might not get back?

So I hope you wouldn’t consider your viewing experience spoiled by the news that Mark Watney (Matt Damon) makes a better fist of life on Mars when left for dead during a gale force gravel storm than you or I might. Watney gets caught in the storm and poleaxed by some loose roofing iron. He disappears like a rag doll into the howling blackness. His vital signs flatline.

Back on the module, fearing it will blow over, Commander Lewis (Jessica Chastain) makes an executive decision to scram. The crew come to terms with their loss. Long faces all round. Watney was A Good Man.

Twist: back on the Red Planet, Watney isn’t dead. He comes to, shakes himself down, and whoa.

And here Ridley Scott makes a sensible choice. Instead of the threnody on loneliness and, well, alienation you might expect, Scott delivers a homily to A Good Man’s ability to keep calm and carry on. And he makes it funny.

As luck would have it, and in this picture Luck has quite a lot of things Watney has no real right to expect, the mission left a kind of astro-garden shed behind. Watney drags himself inside and powers up. It’s well stocked. It has everything a stranded botanist could ask for except a WiFi connection.

Watney gets to work, hoping on forlorn hope the folks at home haven’t given up on him.

They haven’t. At mission control in Houston, at the jet propulsion lab in Pasadena, in the People’s Glorious Revolutionary Space Centre in China, on board the homeward-bound spaceship and in public squares across the globe people come together to hope, pray for, and spare no expense in vouchsafing the rescue of a man who any sensible reckoning says should be dead already and certainly will be by the time a rescue mission can get to him.

Scant thought is given to whether a vanishingly remote chance of saving one American is really the best use of all those trillions of dollars – who knows? It is the future: perhaps the world has already figured out hunger, poverty and disease by then.

And to worry about it would be to miss the point. It’s not about the bike. There are few of the frosty intellectual ruminations that characterised comparable efforts like Moon, Sunshine, Interstellar or Gravity. Instead, Scott fills his screenplay with gently saccharine sermons about the importance of saving A Good Man by ignoring The Man. To rub these morals in he is obliged to drift ever further from the Sea of Plausibility as the film goes on. But it doesn’t matter, because Watney keeps laying down droll one-liners about Commander Miller’s taste for Disco. A well-stocked ensemble cast keeps the action and a little bit of low-level intrigue rolling along. Kirsten Wiig, Kate Mara and Sean Bean play it straight. Benedict Wong (a veteran of several space trips including Sunshine and Prometheus) offers a bit of light relief.

It must sound like I hated this film. I didn’t. I liked it a lot. In Scott’s soft hands it doesn’t feel the Bruckheimer potboiler it probably is. But it isn’t Alien and it sure isn’t 2001: A Space Odyssey. At its heart is Daruisz Wolski’s luscious cinematography – a rose-tinted Jordan is a wonderful stand-in for Mars – and Matt Damon dominates this beautiful screen real-estate, nailing a one-hander he was born for. He plays for — and gets — far more laughs than you’d expect from a man in a year’s alien solitary who has to eat potatoes he grew in his own poo.

We like Damon just as we like Watney. He’s A Good Man. He keeps calm. He carries on.
The ending felt a little bit down beat until the final punchline, for which you will have to wait till the camera pans to the heavens and the credits roll. It’s a peach.