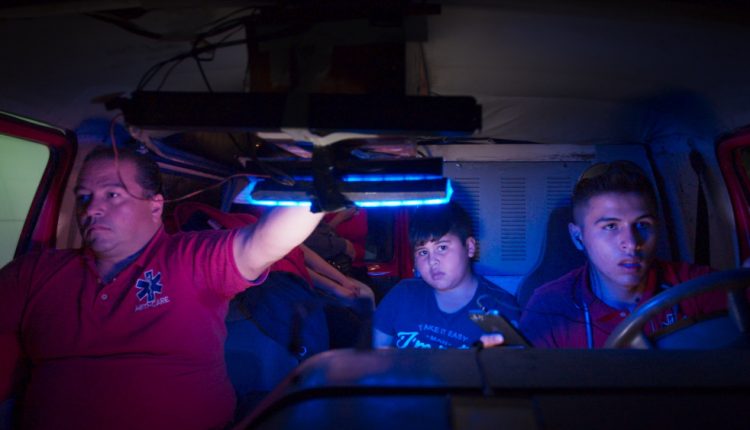 The one thing that seems to be a universal reality around the globe is the constant daily struggles of a working-class family looking to stay afloat in uncertain economic times. Filmmaker Luke Lorentzen’s insightful documentary Midnight Family definitely taps into the spirit of a familial foundation based upon the survival of a nocturnal Mexican clan conducting their family-run ambulance operations for the desperate people that need their late night medical services. The irony of a money-strapped business family catering to other impoverished families they rush to for emergency care is the premise for Midnight Family’s commentary on the societal needy and their dependence on a failing health care system that adds strain to the day-to-day disillusionment.

Lorentzen delves into the depths of the weary psyches of the Ochoa family unit as they compete against other better equipped EMT outfits for Mexico City’s vast distressed patients. The supply and demand for the nine million-plus population that need the medical attention from the seemingly handful of ambulance businesses available is ridiculously disproportioned. Nevertheless, Midnight Family makes a case for those unfortunate souls–working stiffs such as the Ochoas trying to break even in a competitive industry within the medical field and the demographics they rescue–by providing the harsh observations of an unforgiving public and/or private health care system that dares to tease those neglected individuals not privy to the privileged confines of comfort and care. Whether deemed as an omnipresent political talking point or basic human condition ignored by the powerful elite Midnight Family speaks unabashed volumes when it comes to the jeopardized welfare of the exposed masses.

Indeed, the Mexico City-set documentary that chronicles the dark-induced deeds of the Ochoa EMTs as they make their nightly rounds responding to the sickly is an eye-opening wonderment that captures the stark nature of their work-related endeavors. The unpredictability of the nighttime chaos that transpires spotlights the Ochoas through unforeseen medical tragedies, the urgency of blinding flashy colored lights as the wheels race against precious time and the overall life-and-death experiences that surface–it is all surreal and sets the stage for whatever hidden anxieties and angst are released for the ambulance responders and injured alike. It is a mental guessing game on many levels. Will the patients make it to the hospital in one piece? Will the Ochoas be compensated for their services accordingly by their financially-challenged patients as a fragile ambulance business barely making its profit back?

The Ochoas’ private ambulance enterprise, among the rest, is one of only forty-five outlets available by the Mexican government meant to address the health-related hazards of its sprawling community listed in the millions. The stress and toll of these minimal ambulance services is so inconceivable because the government has no clear remedy to offer sufficient ambulatory coverage to a whopping metropolitan afflicted with unexpected levels of vulnerability. The shortage of government-sponsored ambulance units–among the delicate health care concerns–is just the tip of the iceberg when it comes to the problematic profiles of people trying to cope with the rising costs and sufficient medical treatment shared by the working class and disabled.

Head honcho of the Ochoa family ambulance business is ailing father Fernando–perhaps a prime candidate for his own ambulance ride as a passenger dogged by health-related woes. At Fernando’s side during the horrific nightly calls are his trusty young sons joined at the hedonistic hip in evening medical mayhem. Seventeen year-old Juan is the ambulance driver seasoned in discipline and steady nerves. Juan’s impish little brother Josue is a tag-a-long that makes for an able assistant. Together, the Ochoa men are out and about facing the trials and tribulations of other endangered folks’ lives through the unflattering filter of crime, violence, and crippling sickness. Their obligation to serve and protect the broken and bruised is admirable but bittersweet as the payoff for the Ochoa work ethic is another reminder of how close to destitution they are in comparison to the public whose pain they ease with every emergency call.

As the resourceful documentarian, Lorentzen allows his captive camera to invite the audience into the after midnight maze that haunts the Ochoa men. Highlighted are the rawness of the seedy Mexico City streets saturated with the hustle and bustle of unfiltered ugliness–from the damaged bodies looking to be transported to the detachment of emotions shared by the father/sons EMTs wondering if they did enough to ensure eating at their own table if the luck presents itself. Crisis is the name of the game–something that is meant to drive the economical scales in a jittery Mexican landscape aligned with hopelessness and helplessness that routinely hover over the harried heads of the male-bonding Ochoa trio.

Consequently, Midnight Family is a compelling composite of the fragility and durability of the working wonders that strive to take one step forward in the name of progress only to step three steps backwards as the trying times dictate the rhythm of progression. The inequity of the financial force field–blocking the entitlement of health care reform as a guaranteed safety net–is one of the many devastating revenue realities that befall the common man and woman. For the Ochoas, healing is occasionally good for business as they rush to the dire destination in the crossfire of disaster. The question remains: when are they suppose to heal when the ambulance sirens are turned off?