Carved figurines recreate a world of horror and attrition

The filmmaker Rithy Panh, born in Phnom Penh, Cambodia in 1964, was eleven when the Khmer Rouge under Pol Pot took over the country. He and his family were taken to “rehabilitation” camps for slave labor and starvation, and, as we learn in The MIssing Picture,his mother, father, and sister died and he daily buried the exterminated or dead of starvation. In 1979 at fifteen he escaped to Thailand and a year later made it to Paris, where he makes his home. After studying at the French National Cinema School he went on to produce an award winning filmography largely devoted to studying and recreating the Pol Pot period and the tough life in Cambodia since. The Missing Picture is his most personal film — but still detached. The story he tells in a French text coauthored with Christophe Bataille and read by Randal Douc) (dubbed in English in this version) is illustrated using little carved clay figures fabricated by Sarith Mangs and shot in vignettes, small dioramas that are sometimes ingenious and sometimes strangely pretty; or occasionally overlapping to make them a part of black and white stills or insert them in archival film footage. The effect is vivid, yet detached; grim and specific, yet ironic and vague. There isn’t much effort to explain the whole historical context, and those (like myself) who are ignorant of the Khmer Roue or have forgotten the details might want to do some studying up before or after.

Rithy Panh’s first film was Site 2 (1989), a documentary about a notorious torture and extermination site in Phnom Penh, and this was apparently expanded in S21: The Khmer Rouge Death Machine (2003). Rice People or Le peuple de la rizière (1994), based on a novel, is a semi-documentary, semi-dramatic tale of a Cambodian peasant family undergoing one hardship after another. Typically, Panh’s focus is grim and tragic, an outlook not surprising given his traumatic and dire youth. In 2008, by then well-known in France, Panh was given the opportunity to film a Marguerite Duras novel, The Sea Wall/Un barrage contre le pacifique, with Isabelle Huppert and Gaspard Ulliel; despite these well-known names and a decent reception in France (Allociné press rating 3.0). the low-keyed film got no US release, or international attention outside the festival circuit. 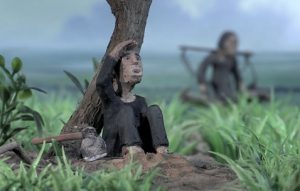 The “missing picture” in the title refers to the fact that under Pol Pot’s totalitarian dictatorship, anyone who filmed actual conditions was executed. Most of what survives are propaganda films. We see excerpts of one that shows a fake battle recreated in a comically amateurish fashion. The phrase also refers to Panh’s lost family history. They lost everything. He refers to the happy days before the horror, dinners with family and friends, books, movie-going. It is all a little unreal, the good memories and the horrible ones.

Panh shows a hand carving the clay figures as if to make clear this is a humble do-it-yourself recreation. He reminisces in detail, but also impressionistically. He tells about the hospital with wooden plank beds where he was a while and where his mother died, recreated with the little figures, like a dollhouse. The workers in the rice fields are recreated the same way, slave-labourers toiling, as he describes the starvation, the efforts to survive by eating insects, rats, and roots — punished by the authorities. This is interwoven with propaganda films. If you look closely, he says, you can tell the small figures shown in the films working in panoramas of rice fields are moving slowly, because they are starving. Panh describes clearly enough what the life at the labor camps was like, the brainwashing — “reeducation,” eradicating of class and individual aspirations, the exhaustion, the desperation, and what the regime at the top was like, even what Pol Pot was like as observed in pubic appearances.

Yet there is an ambiguity about all this: is Panh trying to come closer to his brief traumatic past when he lost his family and almost died or is he trying, with the clay figures, to desensitise himself to it, while keeping it at one remove? And does that work? This is also a personal film (perhaps also a very French one?) in that despite the harrowing specifics (mention of the US bombing too), Panh is poetic and impressionistic as well. Hence he says, “And then one day it all ended and the Khmer Rouge were gone,” but he does not say when that was or how it came about or what followed after; nor does he fill in the outline of his own story that I gave at the start. The Missing Picture deserves good marks for its originality and the validity of its personal account can’t be faulted, but something also is still missing. More of a sense of structure and more historical perspective might have made the film a more enlightening experience and less of a chore to watch. In his Variety review Justin Chang says this film encourages debate about issues of representation in historical documentary. 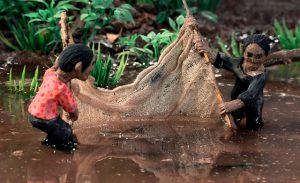 The Missing Picture/L’Image manquante, 90 mins., debuted at Cannes 2013 and continued at other festivals, including the New York Film Festival at Lincoln Center, where it was screened for this review.