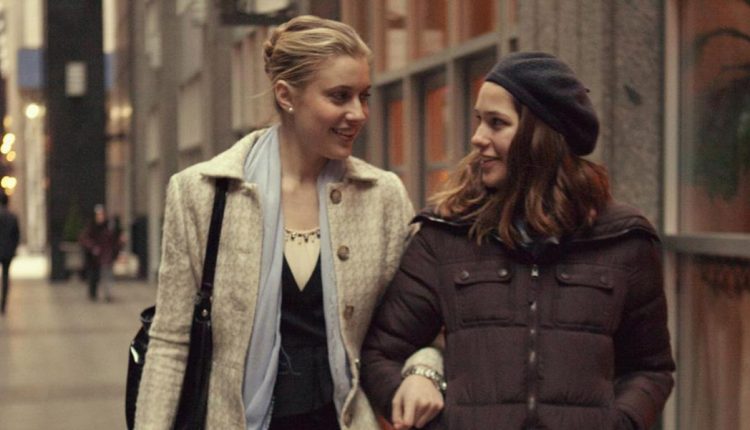 Gerwig charms again, but she and Noah settle for easy

Mistress America is a sort of Gatsby story. Tracy (the excellent Lola Kirke) is a Barnard College freshman and aspiring writer whose life in Manhattan is looking awfully drab till, in desperation, she gives in to her mother’s urging, and contacts the thirty-year-old Brooke (Greta Gerwig), who will become her step-sister upon her mother’s upcoming marriage to Brooke’s father. Brooke lives in a commercial space in Times Square, in the absolute heart of Manhattan, and is a live wire and a character — a variation on the character Greta Gerwig likes to play. Brooke is funny and talks and talks (though her speeches aren’t as complicated as the ones Gerwig had to deliver as the lead of Whit Stillman’s 2011 Damsels in Distress).

Lots is going on for Brooke: she has hip musician boyfriends, is a designer, a tutor, and teaches an intense spin class; above all, she is scheming to start a high-concept restaurant. For a day or so Tracy attaches herself to Brooke, gobbling up everything she says and providing her with admiring company, while cannibalising Brooke’s life and personality for a short story she uses to get into a Columbia literary society-cum-lit mag. Brooke isn’t exactly Gatsby but she seems wonderful to Tracy — at first — and builds a fabulous edifice of brags and dreams. Her personality is larger than life. She makes a good short story that wins Tracy a place among the nerdy literati. But the story has a tragi-comic finale coolly dissecting Brooke’s delusions that gets Tracy in trouble when it’s discovered by Brooke and her friends.

Once again Noah Baumbach has made a movie that’s a vehicle for his girlfriend Gerwig, whose quirk and charm and glow are undeniable. The hit from the collaboration so far, critically at least, remains 2012’s black and white Frances Ha, a quintessentially New York-set vehicle exclusively designed to show off former Mumblecore queen Gerwig’s ditsy, charmingly ineffectual amazingness. The two of them can turn these things out with apparent ease: it’s only been six months, in fact, since US release of Baumbach’s satire on generational envy, ?While We’re Young, again starring Ben Stiller, as in the 2010 Greenberg. ? Though critics may not agree, Greenberg, set in California (and which had a part for Gerwig), co-written by his former longtime girlfriend Jennifer Jason Leigh, seemed to me Baumbach’s most serous and interesting movie. This new one, Mistress America, again, like Francis Ha, is a splendid showpiece for Gerwig, but that’s the trouble. It isn’t enough besides that.

Mistress America is constantly amusing, mostly with Brooke talking about herself, like when she says she’s an autodidact, and “autodidact” is one of the words she taught herself; or when she quips, “I know everything about myself. That’s why I can’t do therapy.” But the epigrams and gibes don’t really drive home a unifying theme as happens in the best comedy. It gets interesting in the middle when Brooke takes her college-age “posse” — Tracy; Tony (Matthew Shear), a classmate with a car who Tracy wanted to be her boyfriend; and Tony’s jealous, conventional girlfriend Nicolette (Jasmine Cephas Jones) — to Connecticut to confront a “long-time enemy” (as a spirit guide has advised) and persuade her rich ex-boyfriend Dylan (Michael Chernus) to back her scheme to start a restaurant. Everybody is good in this sequence, which even Armond White likes (though he finds it falls short of Baumbach and Wes Anderson’s mentor Bogdanovich). It is staged in a fancy modernistic house, including a vivid turn by Heather Lind as the “enemy,” Dylan’s jealous, disapproving wife and former Brooke friend Marie-Claire, who stole a T shirt design from her. Gerwig and Baumbach (who coscripted as for Frances Ha) juggle more characters in this Connecticut episode than in any other part of the film. In fact they overdo it a bit, with a pregnant women’s group, a snide neighbor, and a maid used in the background. Nonetheless in these scenes things get delightfully unpredictable and lively — as in a good stage comedy, which this at times closely resembles. Things wind down as Dylan drolly and delicately lets the air out of the restaurant-scheme bubble — but then grow intense again when Nicolette exposes Tracy’s mean story to all. It’s devolution from there on, ending with a lonely Thanksgiving dinner of the young writer and her departing subject.

When Whit Stillman used Gerwig for his talky, bossy lead in Damsels in Distress — really a variation on Brooke but in a different setting — his heroine changing the world one frat boy at a time — one wondered if he had been thinking of Chloë Sevigny, who was in his Last Days of Disco, but was unavailable this time or just too old. Chloë Sevigny is blonde, and glows, like Gerwig, but she’s cooler, more chic, more mysterious. Gerwig is an actress much at ease on camera, but she lacks emotion and is no femme fatale. Speaking of Stillman, Baumbach can’t evoke social class and lifestyle as he can (though he was close to Stillman in his debut Kicking and Screaming). While the surface of Mistress America is highly enjoyable, and the themes of age and envy are there, there’s not as serious a treatment of them as in When We Were Young. Nor is failure confronted as frankly as in Greenberg; Brooke just packs up her illegal Times Square flat and is off to California — to become another Greenberg perhaps, or to join him. Mistress America feels like a relatively glib and lightweight effort. Baumbach shouldn’t be playing Woody Allen. He’s 45 and should be doing his best work, not treading water and giving his girlfriend one showcase after another.