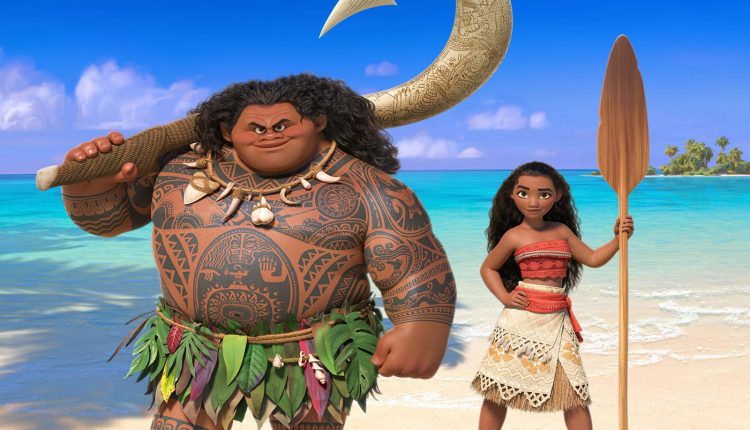 Thank the island goddess Te Fiti for Frozen. Before Elsa and Anna conquered the world with their beguiling tale of sisterly love, directors John Musker and Ron Clements were planning a sea-faring adventure called Maui which followed the folkloric exploits of its titular tattooed demi god, voiced by Dwayne Johnson. While that movie sounds like it could have been a lot of fun, it surely wouldn’t have been a patch on this uplifting tale of empowerment. Taking Disney’s newfound drive for Girl Power to another level, Moana taps into Polynesian culture to tell a lusciously animated tale about a 16-year-old girl searching for her place in the world.

That girl is of course Moana (voiced by astonishingly talented newcomer Auli’i Carvalho), the spirited daughter of a tribe chief who longs to revive her ancestors’ long forgotten tradition as wayfinders. Though her father insists she remains on the island to serve her people, Moana is chosen by the sea itself to reunite a mystical McGuffin with a missing goddess. With blight ravaging her village, Moana finally sees the chance to venture beyond the reef on a dangerous mission to find a legendary demi god who may be her only hope of saving her people.

If the early scenes feel slightly sluggish, Moana really finds its rhythm with the introduction of Johnson’s fishhook twirling demi god Maui. Johnson’s naturally infectious charisma works wonders here, making his bombastically boastful hero impossibly likeable even as he tries everything in his power to scupper Moana’s mission in favour of his own selfish aims. The bickering, True Grit-esque dynamic he strikes up with Moana proves to be relentlessly entertaining. “I am not a princess,” Moana stubbornly insists. “If you wear a dress and have an animal sidekick, you’re a princess,” Maui immediately fires back. Like Frozen’s central pairing, it’s a relationship built on opposition and respect rather than romance, and Moana is every bit her super-powered companion’s equal, helping him to rediscover his purpose as he aides her in search of her own.

Storywise, Moana rarely strays from Disney’s time-tested formula. What’s really missing, though, is a strong sense of villainy to raise the stakes in what turns out to be a fairly underwhelming final act. An underfed environmental message fails to have the desired effect and Moana’s growing bond with Maui lacks to emotional gut-punch necessary to fully compensate.

Musker and Clements (Disney veterans responsible for such classics as Aladdin and The Little Mermaid) offer just enough visual tweaks to the traditional tropes to forgive their narrative shortcomings. Maui’s hand-drawn tattoos are a particular highlight, dancing across his cliff-face pecks like an inky Jiminy Cricket, while the sea is turned into a cheeky sentient wave that guides the heroes along their journey. There are plenty of skilfully executed set-pieces to enjoy too, including a surreal underwater confrontation with a gold-encrusted crab (voiced superbly by Flight of the Conchords’ Jermaine Clement), who battles our heroes while singing a David Bowie-inspired ditty about his love of all things shinny.

The whole movie is stuffed with such ear worming anthems, some penned by Hamilton’s all-conquering creator Lin-Manuel Miranda. Maui’s slick signature song You’re Welcome is unbelievably catchy and proves Johnson can carry a tune (as if he wasn’t perfect enough already), while sweeping sea shanty We Know the Way will be the one the lodges itself in your brain for weeks to come. Moana may not be as ground-breakingly subversive as Frozen, but with its vivid animation, vibrant performances and suitcase full of irresistible tunes, it’s still a fantastic voyage that will have the whole family swept along in its mighty current.