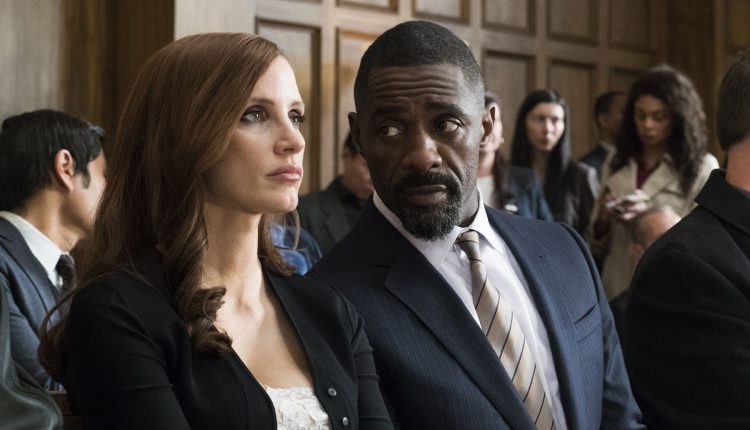 Molly’s Game is a poker thriller based on the autobiography of Molly Bloom, a former professional skier who went on to run the world’s most exclusive high-stakes poker games in LA and New York, before she was arrested by the FBI and charged with racketeering and running an illegal gambling operation.

The film stars Jessica Chastain in the leading role, with strong support from Idris Elba as her defence lawyer, Kevin Costner as her domineering father and Michael Cera as Player X, a Hollywood A-lister and main antagonist during Molly’s time on the West Coast.

This is the directorial debut of Aaron Sorkin (who also wrote the screenplay), and Molly’s Game is packed with the kind of witty dialogue that we know from his work writing A Few Good Men and The Social Network. Indeed, Sorkin uses a similar plot device in this one as he did in his Facebook epic, with Molly’s rise and fall told in the form of flashbacks while briefing her defence lawyer.

And what a rise and fall it was. After a career-ending skiing injury, Molly Bloom puts off law school to head to LA where she lands a $450 a week job as personal assistant to a highly obnoxious wannabe real estate mogul named Dean Keith.

Keith soon tasks Molly with organizing the high-stakes poker games that he clandestinely runs for Hollywood’s elite. The thousand-dollar tips from each player soon solve Molly’s financial problems, but when things fall apart with Dean, she rents a suite at a Beverly Hills hotel and puts together her own game for the uber-wealthy clients.

It soon becomes clear that the Machiavellian Player X is manipulating every situation for his own ends, and when Bloom sees the integrity of her event being undermined, Cera’s character brutally takes away the business from under her feet.

Shifting her poker empire to New York City, Molly dramatically ups the stakes, gaining high-roller clients from the Russian Jewish poker rooms of Brooklyn, one of whom turns up with an original Monet as collateral for the buy-in.

This second half of Molly’s story is increasingly fraught with tension, as the risks get higher, Molly must resort to drugs to keep herself awake, and encounters with the Russian and Italian mafias come at a terrible, and terrifying cost.

The card scenes which drive the plot are truly thrilling, and you won’t need to be a poker expert to feel the exhilarating highs and crushing lows of card sharp Harlan Eustice, on his disastrous night playing at Molly’s table.

That said, if you do brush up on the difference between a Straight Flush and a Three of a Kind, then you are probably going to enjoy these scenes even more.

Like all the best movies which are based on real life events, Molly’s Game will make you want to delve deeper into the true story behind the film. The biggest question which will likely churn in your head afterwards will be who exactly the real-life character that Cera’s Player X was based on.

Sorkin himself diplomatically claims that X is based on a composite of several of Hollywood’s biggest names in the early noughties, but I couldn’t help wondering if Molly’s description of him as a ‘little green screen shit’, wasn’t a reference to a certain actor who pretended to climb up skyscrapers back in those days.

Chastain’s chemistry with Elba allows the exposition-heavy attorney-client dialogue to flow beautifully. And Chris O’Dowd’s role as the drunken barfly is hilarious.

If there is one scene in Molly’s Game which doesn’t quite work, then it might be the uncomfortable and somewhat embarrassing encounter between Molly and her tough-love psychoanalyst father (Costner) in Central Park on the night before her final court appearance.

After ordering her to ‘sit the f*ck down’, Bloom senior proceeds to give Molly “three years of therapy in three minutes”. If the scene would have offered some great insight into Molly’s relationship with her dad or her motivation to do what she does, then it might have been worthwhile, but it fails on both counts, doesn’t really add anything to the film, and frankly should have ended up on the cutting room floor.

Apart from this cod-Freudian scene though, there isn’t another bad performance in the movie. Jessica Chastain is always on top form, combining dynamism, integrity and vulnerability, and you will be rooting for Molly from the moment the FBI knock her door down, all the way to the finale in the courtroom.

With post-Weinstein Hollywood desperately looking for genuinely strong female characters, Chastain’s Bloom is just the performance that 2018 needs. Is it too late for her to pick up an Oscar for best actress? Current odds for Chastain are 50/1 and falling at the time of writing, and we think she could well sneak it.

Robocop: A Look Back At The Part Man, Part Machine, All Cop