11
SHARES
539
VIEWS
Share on FacebookShare on Twitter
The Boomtown Rats didn’t like Mondays. In fact, the first day of the week gets quite a bum rap from most people, representing a return to work, and the long, slow crawl to Saturday.

Just be thankful you aren’t Jim (Jamie H. Jung), whose Monday consists of getting blazed, fired, dumped, made homeless and then finding himself in the middle of a drug cartel turf war, involving two assassins and numerous attempts on his life.

God knows what Hump day must be like for this guy.

Monday was produced through Robert Rodriguez’s recent tv series Rebel Without A Crew, an initiative in which five film-makers are given $7000 (the same budget Rodriguez himself worked from when he shot his debut, El Mariachi, back in 1992) and 2 weeks to shoot a film. 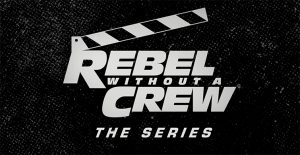 Written and directed by Alejandro Montoya Marín, Monday is one of the latest of these films to be released and, on the strength of this picture, it would seem the initiative was an ingenious idea. Monday is a sharp, funny, surprisingly warm blooded tale of murder and mayhem, that slots perfectly into the Rodriguez aesthetic of using what you have, as creatively as possible.

And creative these film makers certainly are.

Armed with a minuscule crew, all performing multiple tasks on set and location (and if you don’t believe it, check out those end credits), Montoya Marín has crafted a fast paced, energetic piece, steeped in the warm waters of movies past. There are references aplenty, from Leon, to Game of Thrones. There even appears to be a reference to the kitchen scene from Jurassic Park in there, as Jim and his best friend crawl around the floor of a music store, looking for a means of escape from the bad ass assassins (Anna Schatte and Sofia Embid) that are on their tale.
Given the $7000 budget, it’s amazingly shot.
The shooting style has the feel of early Rodriguez, not to mention Edgar Wright, Sam Raimi and the Coen brothers. The cinematography is sharp too, Ryan Alan Halsey complimenting Montoya Marín’s frantic camerawork, with a rich colour palate. The second half of the picture takes place at night, and one can only imagine just how hard Halsey had to work on such a tight schedule and wallet.

It looks like it cost a million, at least. 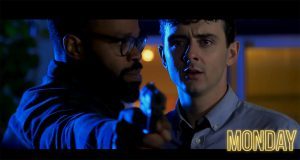 The cast, who will be new faces to most, are uniformly excellent.

Jamie H. Jung gives Jim a Jack Lemmon-esque every man quality, upping the neuroses as his day, and life, fall apart, and the stakes begin to climb. As his best friend Paul, Kenneth McGlothin (also a co-producer on this film) proves the perfect comic foil to Jung’s sad sack, keeping the one liners, and constant struggle to be the alpha male, just the right side of credible. When they team up, the film kicks up a gear, and it’s their relationship that keeps the story’s heart intact, a welcome breather, as the violence begins to double up, culminating in a shooting at a house party that miraculously manages to maintain a comedic tone, even if the concept itself is rather horrific.

Anna Schatte contributes to the current trend of women with weapons, her performance a subtle blend of feline prowess and homicidal tendency. She clearly relishes every chance to smack down anyone in her way, with a sly wink to the audience that this is probably just the tip of the iceberg. Who knows what she’s capable of, unleashed? 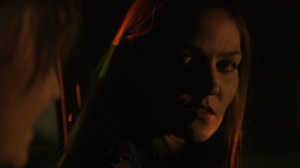 The best performance in the picture comes from Sofia Embid, as Sam, who might just be the most charming, likeable assassin you’ve ever met. Matching physicality with comedic timing, and threat with heart, Embid also worked on the picture as the Slate Clapper, which just reinforces the cliché that women are great multi-taskers. One would be more than happy to see a prequel, in which we learn just how her character fell in with such nefarious villains.

Extra credit must go to the voice of Jerry Spears, whose numerous phone calls to Jim throughout the picture (not to mention a post-credits sting) are an absolute riot.

If the film has a flaw, it’s in relation to its budget. At just 57 minutes long, the story feels a little light, a fact hidden beautifully by some brilliantly inventive editing (Montoya Marín working with David Ferry Jr.) and a relentless pace that keeps the audience on their toes. Given double the money, Montoya Marín could have developed some of his minor characters better (Jim’s girlfriend, and the two tribes going to war, are given fairly short shrift).

Having said that, there are seven days in a week, so maybe there is more story to tell. Like the best films of this type, it leaves the audience wanting more.

Monday is a magnificent example of what happens when you give a film maker the creative freedom to let rip. Montoya Marín proves that he is a director with a distinctive energy, an energy that should be cherished. Yes, it doesn’t explore any deep or philosophical problems, but then, those kinds of movies are hard to eat popcorn to.

This is the kind of movie popcorn was invented for.

Monday will be screened at the SOHO INTERNATIONAL FILM FESTIVAL in June. 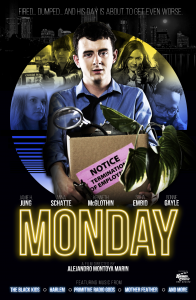 EIFF 2014: An Interview With Terry McMahon