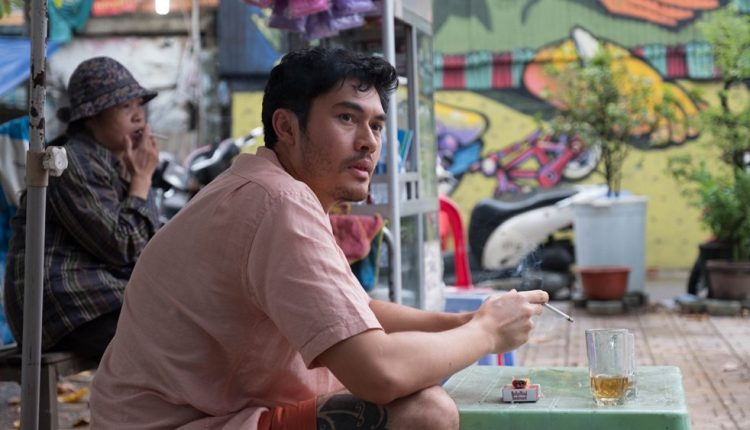 In the second feature film by Cambodia-born British filmmaker Hong Khaou, Monsoon stars Henry Golding as Vietnamese-British man Kit, who returns to Vietnam to scatter his parents’ ashes. Having left the country when he was a child, the film follows him rediscovering his roots.

At first glance, Monsoon, like its protagonist, feels lost amid the chaos of Vietnam. When audiences first see Kit, his look of confusion creates uncertainty regarding the film’s premise. His seemingly detached state upon his arrival causes him to struggle to connect with others, especially distant cousin Lee (David Tran). Along with him having left his job to ‘go travelling’ and choosing to have the odd sexual encounter, Kit’s path in Vietnam feels unclear.

Thankfully, Monsoon slowly blossoms into a contemplative journey for its protagonist, as he tries to reconnect with the life and country he had left more than 30 years ago.

Kit’s unfamiliarity with Vietnam betrays his lack of knowledge to his family’s history, as well as his apprehension of being in what is essentially an unfamiliar country. This confusion grows as we discover his parents’ lifelong unwillingness to talk about Vietnam, highlighting the painful circumstances of their escape due to the war and their sacrifice for a better life. Khaou subtly references this period through candid conversations, allowing Kit to come to terms with his past without being emotionally overwhelmed. They also enable him to see Vietnam through the perspectives of others such as tour guide Linh (Molly Harris) and love interest Lewis (Parker Hughes), an African-American whose father had fought in the war. Monsoon‘s melancholic tone gradually lifts as Kit slowly rediscovers his roots, showing that he is closer to finding his place in a country he used to call home.

In contrast to his performances in A Simple Favour, The Gentlemen and Crazy Rich Asians, Golding delivers a quiet, controlled performance as the dishevelled Kit. With minimal dialogue, he subtly conveys emotions and allows his settings to guide him, proving that he can make his mark outside of mainstream cinema. Behind the camera, Khaou and cinematographer Benjamin Kracun cleverly highlight the country’s changing landscape through stunning overhead wide-angle shots. They collectively celebrate the old and new Vietnam that can easily symbolise Kit’s childhood being ‘wiped out’ by Western influences – in other words, a visual juxtaposition on the protagonist’s identity.

Monsoon is out in UK cinemas and on Digital on Friday 25th September.