Like Terry Gilliam and Andy Kaufman, Michel Gondry is one of those filmmakers whose style is so ‘out there’, it can be hard to enjoy their work amidst the chaos on-screen.  Even though Gondry’s trademark eccentricity won hearts in Eternal Sunshine of a Spotless Mind, nothing has really topped that in the ten years since its release.  His new film, an adaptation of Boris Vian’s post-War novel Froth on the Daydream, is his latest attempt to recapture audiences through his unique storytelling style.

After meeting at a party, Colin falls in love with Chloe (Audrey Tautou) and marry after a whirlwind romance.  But as Chloe’s health begins to deteriorate, Colin’s colourful and exciting life begins to dwindle.

Gondry’s wackiness, surrealism and imagery dominates the film, from the whimsical dance sequences to Colin’s innovative gadgets and apartment.  Given Gondry’s filmography, it resembles an extended music video in terms of visuality but as a film, it is easy to quickly lose interest in something that is so chaotic on-screen. 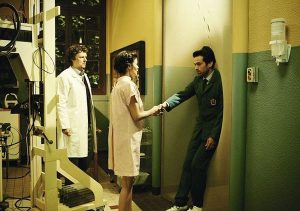 The chemistry between its stars Duris and Tautou doesn’t do enough to pull on the heartstrings and individually, they try to be unique and whimsical to match its outrageous settings but most of the time, they come across as awkward, trying to outdo each other in who can be the most quirkiest.  The screenplay, co-written by Gondry and producer Luc Bossi, doesn’t encase much emotion and unfortunately, takes a major step back for the visuals to make an impact to the audience.

The subplot with Chick and his overwhelming passion for Partre is intriguing, especially as young Colin bequeaths a large portion of his fortune to Chick to survive on, only for him to spend it anything remotely related to the author.  It is frustratingly not covered in a lot of detail – it is too black and white and it would be interesting to see more of the psychological effects aside from his predictive repercussions to his relationship with young Alise (Aïssa Maïga).

The highlights of Mood Indigo include the little snippets of stop motion animation, which is reminiscent of Tim Burton’s Beetlejuice; animated objects and crazy set pieces help Gondry’s eccentricity bring to life so even if it is a bit nuts, the imagery is full of imagination.  Omar Sy’s happy-go-lucky Nicholas brings a smile whenever he is on-screen and his unwavering loyalty to Colin reflects the kind of friendship that is expected of a best friend i.e. Chick, rather than a lawyer-cum-chef.

Gondry had a lot to prove, especially after 2011 box-office bomb The Green Hornet, to prove that he still has the storytelling skills that won him the Academy Award in 2004.  Even though Mood Indigo falls short on the narrative side, it is visually enjoyable and fun.