Micro-budget film making such as Mountain, can be a mighty hard thing to criticise.

Like that pair of novelty socks that your four year old child gives you as a Father’s Day gift, or the half pint of cider that a friend might buy you when it’s their round in the pub, you always get the sense that the heart is in the right place, even if the results are disappointing.

By the same token, although it can be easy to damn a film for low production costs, there is that flip side, in which you can also commend it for the same reasons.It really depends on the finished product.

Mountain sits somewhere in the middle.

At seven minutes in length, it certainly wastes no time in getting its point across, and yet, one gets the sense that a little more room to breathe would have done writer/director Johnny Herbin’s concept the world of good.

In many ways, Mountain feels like a shortened version of Fear and Desire, Stanley Kubrick’s earliest feature, about soldiers in an unnamed war, lost behind enemy lines. And while the echoes of many war films resonate throughout Herbin’s picture, The Thin Red Line and Saving Private Ryan among them, these feel more like a reminder that other film makers have already been here, rather than a statement of intent from a fresh new voice. That’s not to say that the film is a disaster. 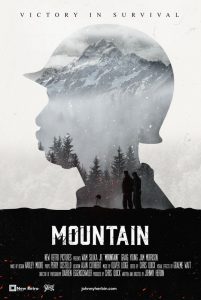 One can only marvel at the fact that the film cost so little to make, and looks superb, Darren Eggenschwiler’s crisp black and white cinematography bringing a genuine threat to the landscape through which the soldiers travel. A sequence in which a character is pursued through the woods at night, is particularly well shot. The costumes are also wonderfully accurate, suggesting that we are immersed in WW2, although this is never properly specified.

The story also resonates well, on a metaphorical level, as the surviving soldier finds himself trapped as much by time, as the enemy, allowing the film to reveal a heart-breaking twist at its climax, which works surprisingly well.

The problems, as always, lie with execution.

For a start, there are no real characters here: no one we can really relate to; no one to really care about. Certainly the idea of the anonymous ‘citizen soldier’ lends a certain leeway to character development, and yet, you yearn for just a taster of who these men are, if only to give them each some identity, or context.

…you get the feeling that Herbin is going for a sense of urgency, even if it is at the expense of any character development.

Mountain‘s sound design is a little messy too with the voice over narration often lost behind the music and sound details, while the edit lacks any real pace, which is quite an accomplishment at seven minutes long. Then again, you get the feeling that Herbin is going for a sense of urgency, even if it is at the expense of any character development.

It’s hard to gauge the actors’ performances either. They certainly look the part, and lead actor Wam Siluka Jr.  portrays the terror of the last man standing with a decent sense of authenticity, although Siluka Jr’s American accent is a little jarring. The film is so brief, however, that most of the performances are conveyed through movement, as the soldiers either fight, or run away.

Certainly it’s easier, as a critic, to side with a film such as this. After all, we’re privy to the story of what it took to get the film made in the first place, and, with knowledge of just how hard it is to make a good film, one could easily let the inconsistencies slide. But then that would hardly be constructive, and in the end, it’s the audience who will make the judgement calls anyway, so you can really only judge the film as a whole, despite the limited means by which it was produced, and the sense one gets is that there are bigger themes waiting to be explored, themes that will need a bigger budget, larger cast and more ambitious canvas, to convey properly.

Which is not to say that Mountain isn’t impressive. It’s just that it tries to do too much with too little.

Mountain will premiere at the Portobello Film Festival in London on 13th September 2018.