I’m not crediting everyone individually here, because it would just take too long, but Movie 43 puts together a decent list of names both behind and in front of the camera. It’s a comedy movie made up of sketches, connected by a framing device that, depending on which version you watch, is either a desperate man (Dennis Quaid) pitching to a movie exec (Greg Kinnear) or a bunch of kids looking for material on the internet. Made, apparently, as a homage to films like The Kentucky Fried Movie (were there many other movies like it? I can only think of The Groove Tube off the top of my head), this film goes out of its way to offend and/or gross viewers out. It might succeed, but it often forgets to make the comedy. I highly recommend the much superior Dirty Movie to anyone wanting nothing more than a loosely connected selection of comedy skits. At least THAT is funny. 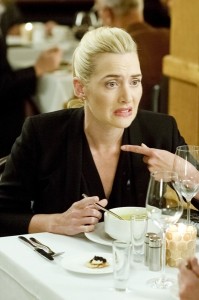 The first sketch sets the tone for the movie. Kate Winslet plays a woman going on a blind date with a man (Hugh Jackman), who turns out to be incredibly handsome and charming. He also has a pair of testicles dangling from his chin. That’s the joke. He never mentions them, while Winslet is constantly grossed out by them as they get food spilt on them, lead to hair dropping into soup and generally get in the way. The next sketch, featuring Liev Schrieber and Naomi Watts homeschooling their teenager, is just as crude and potentially offensive, but it also manages to be quite funny. Enjoy it, things are about to get a LOT worse. Sketch three is all about Anna Faris asking her lover (Chris Pratt) to poop on her. So he starts to fret about this situation and consider ways to make the best poop. I just had to type out that sentence because of this damn sketch. It’s a load of shit. Literally. 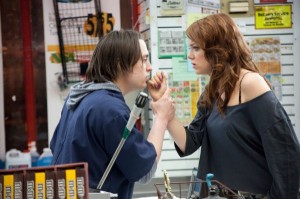 Sketch four tries, but fails. It’s about a young man (Kieran Culkin) and woman (Emma Stone), ex-lovers,  throwing insults at each other while the former serves the latter at a store checkout. The joke is that they can be heard over the store tannoy system. “iBabe” is mildly amusing, as a bunch of people (headed up by Richard Gere) fail to realise just why young men are maiming themselves on a gadget that looks and feels just like a real woman. The fact that it has a fan cooling system located in a certain crevice makes the reason obvious to one young woman (Kate Bosworth) but she seems to be alone in putting two and two together. Things pick up a bit more, and the film is in the middle of its strongest section here, when the next sketch shows what happens when Robin (Justin Long) tries his hand at speed dating. Batman (Jason Sudeikis) comes along to throw a spanner in the works and generally be a bit of a douchebag.

Even the next sketch is pretty funny, despite (or because of) how distasteful it is, as Chloe Grace Moretz unexpectedly has her first period while on a date and has to put up with the overreaction of her date (Jimmy Bennett) and his older brother (Christopher Mintz-Plasse). Then we get a skit in which Johnny Knoxville gives Seann William Scott a leprechaun (Gerard Butler) for his birthday. Another duff one. Stephen Merchant and Halle Berry provide some laughs as two people who turn their date into an outrageous game of Truth Or Dare, and then it’s on to Terrence Howard giving his basketball team a pep talk that consists of him simply reminding them all that they are black while their opponents are white. To be fair, that may sound awful as written down here, but it’s quite amusing. Finally, the end comes, mercifully, with a sketch that shows a relationship between Josh Duhamel and Elizabeth Banks being jeopardised by a jealous, animated cat. 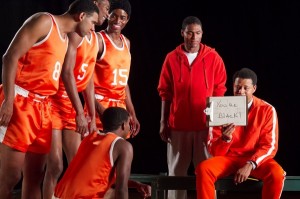 So, you may be asking yourself, if I hated the movie so much then why did I spend so much time describing each sketch? Well, because that’s all there is to it. The different writers and directors (including James Gunn, Peter Farrelly, Elizabeth Banks, Griffin Dunne and many more) don’t add any style or individuality to their segments because this isn’t about that. This is about filming skits. Nothing more, nothing less. That doesn’t have to be a bad thing (just check out the other movies mentioned in the first paragraph), and the makers of this movie certainly gave themselves a head start by assembling such a great cast, but in this case it results in something so puerile and tiresome that you may just end up feeling as angry as I did when the end credits roll. Especially if you paid money for it.

Die Hard 4K: What Can Dads Learn From John McClane?