Collage of abuse and escape marks debut for designer agnè b. [Agnès Troublé]

“That trip was the happiest memory of my childhood,” says a woman we see only from behind, who speaks of satisfaction with a child of her own and trustworthy husband. “I often thought of Peter.” So ends the fashion designer agnès b.’s feature film debut, the a story of an 11-year-old French girl (in Orléans), the oldest of three kids, who is sexually abused by her out-of-work dad and runs off from domestic trauma by leaving a school beach picnic with a strangely obliging Scottish trucker (that’s Peter) for a drive southwest across France. Child sexual abuse is a disturbing theme that impresses us even as we find the cinematic means of enlivening the road trip clumsy and distracting. The irrelevant experimental clutter includes multiple screen formats with garish 16mm. colour, an overlaid drawing, double images, a scene in black and white, previews flashed on a a TV monitor, two ashen butoh dancers in a wood, music from a Vivaldi contata, and other devices that all add artistic pretension without a necessary contribution to the action and wind up feeling amateurish and overreaching. 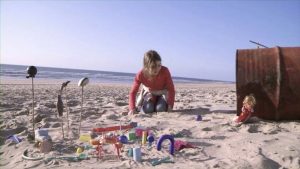 The film is also uncertainly paced and overlong. Even the opening at-home section establishing little Céline Meunier’s oppressive situation drags, when it should shock and enthrall. The long section of the girl’s flight with the trucker is shapeless and emotionally flat due to uninteresting writing and shaky actors.

Still the tragic aura of incestuous child sexual molestation hangs over the narrative. The power this lends the film also gets at least an initial boost from a notable cast the well-connected agnès b. has assembled. In the role of Céline-AKA-Hmmm’s miserable father — a weepy, perpetually nervous chap we’re asked as much to pity as despise — the film cast Jacques Bonnaffé (Lemming, The Page Turner), who positively exudes portentous gloom. As the girl’s grandmother, too religious and innocent to guess what could be upsetting her, there is the French film and theatrical great Marie-Christine Barrault. As the girl’s mother, we get the art-house idol Sylvie Testud (Fear and Trembling, La Vie en Rose, Lourdes). Claire Denis muse Grégoire Colin even has a cameo. More screen time however goes to the stiff Lou-Lélia Demerliac as the emotionally repressed girl (who does resemble Testud) and to non-actor, documentary filmmaker Douglas Gordon as the truck driver, a central character whose behaviour never makes much sense. 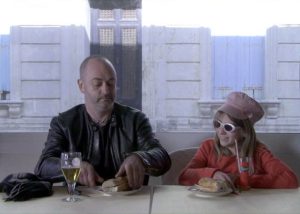 It’s initially established that mom (Testud) is out working at a local bar all the time, struggling to pay the bills with dad (Bonnaffé) moping around the house, tippling, and taking Céline upstairs in the evening to abuse her sexually before mom gets home. His brief soliloquies make it clear he hates himself, but can’t stop. To externalise Céline’s isolation and give her a voice the film resorts to the rather artificial device of having her constantly talk to a ratty little Barbie doll, in effect her main companion. Her classmates think her odd. She begs grandma to take her in, but grandma doesn’t see cause to remove her from home. The school trip provides her escape. It’s not clear exactly how she gets Peter to give her a ride in his truck. He shows her a little photo of wife and kids and utters a single word: “Dead.” That is our explanation and motivation for what follows. Peter and Céline develop a playful, fun relationship that’s obviously doomed, since radio reports of the girl’s disappearance are followed up by posters of her face everywhere. She gives away that she’s hiding by refusing to give her name. “Je m’appelle Hmmm. . .” (My name is Mmm) is all she’ll tell anybody. 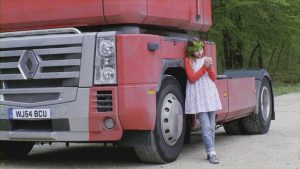 Eventually authorities close in, and Céline and Peter are taken away separately. What he does is surprising, inexplicable, and arguably irrelevant, a distraction from the theme that also shows an inability to work out a coherent narrative thread on the part of Agnès and co-script writer Jean-Pol Fargeau (who has often collaborated with Claire Denis).

My Name Is Hmmm. . . undoubtedly makes an impression but one may seriously question whether the filmmaking is accomplished enough to justify high profile film festival presence. Simpler means, better writing, and sharper pacing might have made of this an effective film.

My Name Is Hmmm. . . debuted at Venice and was screened for this review as part of the New York Film Festival at Lincoln Center, September 2013. “agnès b.” is the name of the clothing line owned by Agnès Troublé. Having a net worth in excess of 65 million euros and being a major patron of the arts, she has previously been involved in various film projects, including the restoration of Jacque Tati’s Playtime.