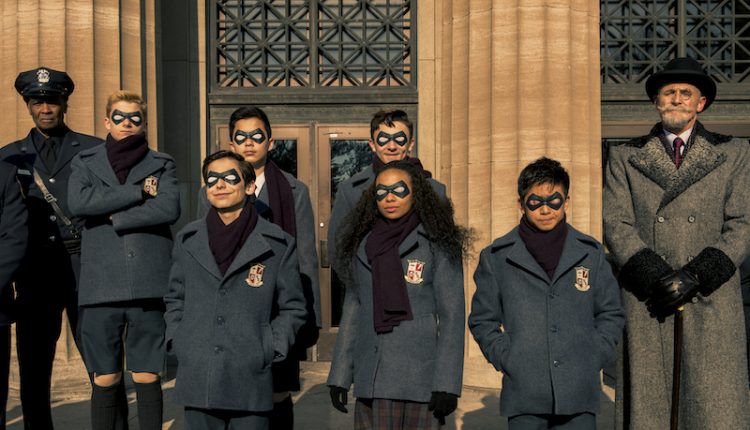 A blend of Miss Peregrine’s Home for Peculiar Children and Watchmen, Steve Blackman’s The Umbrella Academy is the latest adaptation by Netflix involving a group of superheroes.

But let’s face it – it is hardly the most original concept. In recent years, TV shows such as Arrow, The Defenders, The Runaways and Misfits (formerly starring Sheehan, who plays Klaus) have had their own take on superhero teams. However, Netflix is taking a gamble, given the cancellations of its highly popular Marvel series that now include Jessica Jones and The Punisher. However, does The Umbrella Academy bring anything new to the table?

The choice to stretch out the six-issue Apocalypse Suite volume has led to the inclusion of subplots and supporting characters with mixed results. After a slow start, the tone of Jeremy Slater’s script wavers between episodes and the speed of the narrative (mostly) drags on to the point of frustration. In addition, supporting characters such as Grace (Jordan Claire Robbins), Patch (Ashley Madekwe) and Pogo (Adam Godley) provide emotional yet ineffective fodder to the protagonists. In fact, the only watchable supporting characters are assassins Hazel (Cameron Britton) and Cha-Cha (Mary J. Blige), whose loyalty to not only each other but to their work is slowly tested.

Unfortunately, most of the other family members are almost stereotypical. Luther (Tom Hopper) is quiet and dull, Diego (David Castañeda) is a moody, knife-wielding vigilante, and Klaus uses drugs to suppress his skills. Thankfully, newcomer Emmy Raver-Lampman saves the siblings from being total arseholes as Allison, as she is the only one eager to build bridges with Vanya and possibly bring the siblings together.

Ellen Page is great as Vanya, as her exclusion from the Academy’s missions and isolation from her siblings by the cold-hearted has led to low self-esteem. Needless to say that her choice to throw herself into her music, as well as love interest Leonard (John Magaro) is of little surprise.

Surprisingly, Vanya’s temperamental character development is relatively normal in comparison to the biggest plot – the impending apocalypse. Driving its prevention is the tenacious Five (Aidan Gallagher), whose return to present-day New York raises more questions than relief from his family. Despite being a world-weary efficient killer, his youthful appearance leaves him at a disadvantage, as it is difficult to think that this ‘kid’ can motivate his family to help save the world. But thanks to his confident smile and sharp delivery, Gallagher plays the arrogant Five well and effortless exudes a directness that overshadows his co-stars.

Overall, The Umbrella Academy may be the latest in a long list of superhero adaptations but its speed and uneven tone are a detriment to its initial promise. Now that there are rumours of future series, showrunner Blackman may have to up his game to win audiences over.