Bad things tend to happen when comets fly too close to our planet. Sometimes it can lead to dangerous triffids, sometimes it can lead to debris that brings some new life-form to Earth and sometimes it turns most people to dust, leaving others to wear away over time and eventually become homicidal zombie-like humanoids. This last scenario is how things play out in Night Of The Comet, a fantastic comedy horror written and directed by Thom E. Eberhardt that many horror fans look upon with great affection. And rightly so. 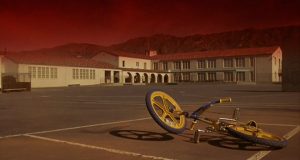 Catherine Mary Stewart and Kelli Maroney are two sisters, Regina and Samantha respectively, who have the good fortune of NOT being turned to dust when a comet wipes out most of the human race. Unfortunately, it’s hard to see the silver lining when they wander around the city in search of anyone else who may be alive. They do meet one decent young man, Hector (Robert Beltran), but any others they meet seem too dangerous after their exposure to the comet (such as the character played by Ivan E. Roth) or have an agenda that may not be conducive to the continued good health of the girls.

While this is one of the more unique zombie movies from the 1980s, I can easily imagine George A. Romero taking a bit of a shine to it. As smart and substantial as it seems to be silly and vapid, this has plenty of commentary running through from start to finish. The evil side of human nature is looked at, of course, as well as consumerism, the teenage mindset and more. Writer-director Thom E. Eberhardt does a fantastic job of mixing everything together without forgetting to keep people entertained throughout. 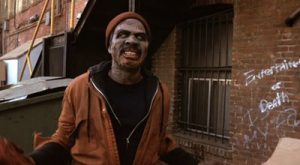 The film is boosted immensely by the likability of Stewart and Maroney in their lead roles, with the former quickly realising the full extent of the situation while the latter struggles to deal with the sudden change. Beltran is fine as Hector, his character written as a nice guy without seeming perfect, and Roth is a lot of fun, and very memorable, in his small role. Geoffrey Lewis and Mary Woronov play a couple of scientists who figure more prominently in the second half of the movie, and fans of those two will be pleased by their performances. 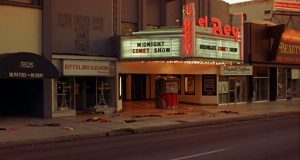 It may not be as scary and/or gory as some horror fans would like, but Night Of The Comet makes up for that with its sheer entertainment value. It’s not quite a classic, but it is eminently rewatchable and completely deserving of the adoration it receives from those who have been singing its praises since the eighties.