Director/writer Kelly Reichardt seems to be carving out a niche as an expert in measured character studies that blur the boundaries of genre film making. While her latest effort may seem to be running at a sprint compared to previous work, her environmental activists/terrorists make for a calm and contemplative thriller. It falls by the wayside in the final act but crafts a satisfying experience up to that point.

Young activists Josh (Jesse Eisenberg) and Dena (Dakota Fanning) are planning something big. Josh is the serious idealist, paranoid and tense at all times, while Dena seems to treat the whole affair as a game. Teaming up with the older and not entirely reliable explosives expert Harmon (Peter Sarsgaard), the trio plot to blow up a dam to make a statement about the damage such projects cause to the environment. However, as is the way with these things, an unforeseen occurrence leads to a tragic consequence which they are forced to deal with.

Reichardt is no bombastic director bathing her films in moments of flashy action and hardwired tension. She excels far more at the minutiae of life. The interactions between her leading trio are wonderfully observed with distinct personas developing for Dena and Harmon in particular. Little quirks emerge for them all. Harmon turns out to be a much flakier guy than the other two hoped for while Dena is ill-equipped for the reality of their task. It’s only Eisenberg that struggles, stuck with a character so taciturn he’s practically a blank slate. 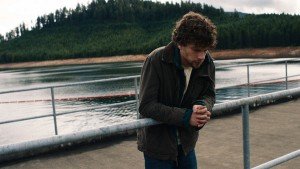 The environmental destruction people have wreaked on the world is carefully weaved into the film. When they go to buy a second-hand boat, the camera lingers on the seller’s sculpted garden and the golf he’s watching on TV. They even end up discussing the damage golf courses cause. A dead pregnant deer lying on the edge of the road later is blunter but still effective.

For all the character focus, the dramatic high water mark comes when the three radicalists destroy the rivers high water mark by taking down the dam. Without ever rushing the drama, Reichardt builds considerable tension in the run-up and immediate aftermath. Roadblocks are thrown in along the way – an unexpected passer-by, a stalling car and even an actual roadblock – without ever lasting long enough to become forced.

It’s the aftermath that drops away. When their actions lead to unexpected consequences, pressure mounts on all three as they struggle to deal with their crime. Yet the realism that marked the first two acts begins to break down. Josh’s blank face can’t explain what’s going on and soon enough they’ve stumbled into high melodrama and a series of preposterous actions. It’s a disappointing end to an otherwise absorbing story.

Reichardt has crafted an interesting and thoughtful film that can’t see itself through. There is still plenty to recommend it, particularly the sharp character focus early on. If only it could have held that note to the end.