Before I attempt to check my biased opinion at the door, allow me to state upfront that I dislike the notion that every classic horror film needs an update. I’m all for a good remake/re-imagining, but I think they should be reserved for films that have not aged well (looking at you Children of the Corn). I’ve despised the Texas Chainsaw Massacre, Halloween & Friday the 13th remakes. None of them seemed to have any awareness of what made the original movies so good and they inject pointless backstory where it is absolutely unwanted and unneeded. I don’t want Leatherface to have a motive (Skin cancer? Please.) Michael Myers was ten times scarier when he was just a sweet looking blonde kid from the suburbs who killed his sister and her boyfriend for no good reason (Oh, his dad’s an alcoholic and his mom’s a stripper now? Nice. Any more cliche’s you wanna throw at us, guys?)

With all that said, we’re talking about Nightmare on Elm Street here and I grew up with these movies and believe out of all the 80’s/90’s slasher flicks, these ones were the most imaginative and frightening. The notion of a bogeyman who kills you in your sleep is truly terrifying and it opens the door for a lot of creativity. Jason Vorhees only gets to conduct his murders at a camp (unless he makes the trek to Manhattan or space) but Freddy Krueger operates his death spree’s in your dreams, which can take any form and move in all sorts of random, strange directions.

Don’t want to get chopped up with a machete by a pissed off goalie? Skip the trip to Crystal Lake this summer. Afraid you might be stalked by a Shatner-faced lunatic with a proverbial axe to grind? Conduct your trick-or-treating elsewhere of Haddonfield. But no matter what you do or how much coffee you suck down, you will be falling asleep at some point. 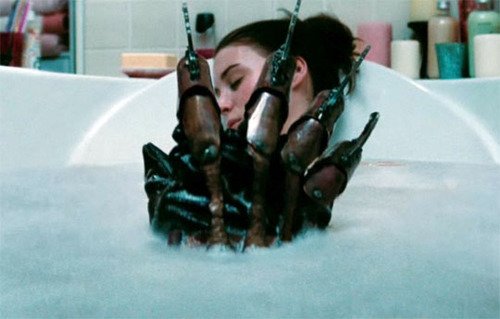 My biggest problem with the film is that is simply is not entertaining when it should be. The concept works and has worked before, (the original was inventive and eerie, the sequels were tongue-in-cheek fun) but the movie gets bogged down with way too many boo-scares and uninteresting characters early on. I am so sick of seeing that same shot of the long hallway where a character stands at the end of it calling out “is anyone there?” only to have a figure quickly pass by the foreground with a loud music strike. It’s manipulative, redundant and audiences are too aware of it now. Oldhat trick. Let’s knock that shit off, Hollywood. You’ve got the money and the know-how, try scaring me with the images instead.

The teenagers, who were bubbly kids-next-door types in the 80’s have been turned into mopey, morose cardboard cutouts in this version. I guess it’s supposed to be a reflection of this generation, but there’s only so many times I can see them pout on screen before I stop caring whether or not they make it out of this alive. Why does everyone have to look and behave like glum, vacant rejects from the Twilight movies? It’s not engaging and once we start to go through the motions of the paper-thin, setup-and-kill plot, I’m pretty much rooting for Freddy to take these sullen sad-sacks out.

Now lets talk about the bastard son of 100 maniacs for a moment. This is Robert Englund’s signature character. He’s played him in eight films that spanned over two decades. These are tough shoes to fill, but I think Jackie Earle Haley is inspired casting. He played a sympathetic creepshow in Little Children and a gravel-voiced vigilante in Watchmen (this incarnation of Krueger is almost a merger between both of those characters). I think he’s quite good for what he’s given. One of the updates of the character is that Freddy is no longer a child murderer, but a child molester instead – which does slightly change the game. Englund’s Krueger was a menacing, over-the-top lunatic who loved torturing his victims and then gleefully spouting off a catchy one-liner. Haley’s is a bit more understated and sinister. They’re both monsters, but in a different sense and the fact that this version of Krueger has a pre-existing relationship with the actual children of Springwood (as opposed to just their parents) does put a bit of a unique twist on the story. It’s not necessarily better, just different. And that is one of the few things that this remake brings to the table – an interesting spin on the familiar story. I’ll give it points for that alone.

The micronaps idea is a decent one and I liked the fact that the movie essentially allowed Freddy to pop up at any unexpected moment because one of the characters is basically dozing off. One of the few decent scenes in the film is a very brief, but spooky shot where Nancy is trying to stay awake while sitting in a car and Krueger shows up out of nowhere ripping her out from the passenger seat. It lasts about three seconds, but it was genuinely surprising. But really, does every dream sequence have to ultimately end up in a steam filled, boiler-room/warehouse? Part of what made the original flicks so fun was the fact that we slipped into a dreamlike state where the situations (and kills) could be executed with some imagination. Everything is so straight forward in this version. The fantastical element has been completely drained from practically any scene that isn’t a wink or nod to the original movies (and even though we get a few of those, they mostly just feel photocopied anyways).

So I walked into this flick skeptical, but hopeful. However you cut it, though, this new Nightmare is quite simply a mediocre, lukewarm effort. It is not nearly as bad as the other remakes I mentioned earlier, but even that’s not really saying much. This is paint by numbers, slasher-movie fare. Serviceable, but not very creative, which is a shame because you can sense that the elements were all there but the filmmakers weren’t quite sure how to put them together. While it was fun to see Freddy on the big screen again in a new form, at the end of the day this just ends up another unnecessary trip back to the well. You’ll sleep just fine. 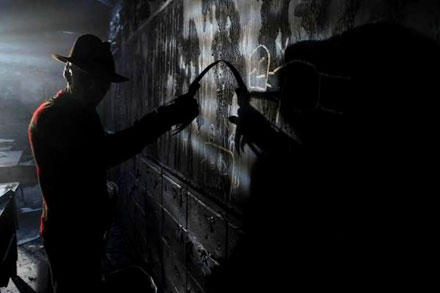