Noah is a righteous man. He and his kin have been chosen by God to survive the apocalypse by flood, and instructed to build an Ark to shelter two of every living species during the coming storm.  Crowe’s Noah, however, like other prophets who receive revelation in a dream, suffers from a hazy interpretation of divine will. Crowe’s Noah believes his family is a mere temporary expedient in the transition of the earth to a new Eden free of human infestation. This is a fine source of conflict and drama, if not carried to the point where the true believer descends into madness. When Noah’s adopted and formerly “barren” daughter, Ila, portrayed by Emma Watson, bears twin daughters, he misses this miraculous sign from God and resolves to destroy these vessels of humanity’s seed. Jesus said a prophet is without honour in his home town; Noah is a prophet without honour in his own home. He further alienates the family by failing to save the life of the love interest of his younger son, Ham. Noah’s wife, Naameh, appeals to her husband on the grounds that the pang of doubt he feels is God’s way of encouraging him to trust his own heart, his own judgment. Will she succeed?

What are humanity’s sins? What are the grounds for mass execution? Aronofsky proposes that they are the descendants of Cain and they eat meat? But God forbade the killing of Cain earlier in Genesis so how can He now plot the extermination of all of his descendants? Is sinfulness in their blood? We don’t see it. Beasts eat meat and they are to be spared. Why condemn humanity for this same act?  This leaves the viewer’s sense of logic unsatisfied. In this respect, Noah is not revisionist, visionary or even vegetarian, just half-baked. Such harsh judgment as the undoing of creation must be better justified. Such as: And God saw that the wickedness of man was great in the earth, and that every imagination of the thoughts of his heart was only evil continually.  Now that’s the stuff that a great scene is made of. 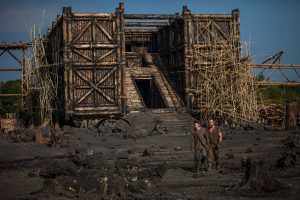 Most Old Testament stories are somewhat light on detail and the filmmaker is obliged to contribute something. For example, the bible says that at this time there were giants upon the earth. Previous cinematic versions of the Noah’s Ark story ignore this goldmine of possibilities. Aronofsky runs with it. Also Aronofsky exhibits a more interesting and plausible insight into the probable reaction of people, in this age of prophets and miracles, to the spectacle of the Ark’s construction. Not with mockery but covetousness. The survival instinct is no less a force in the sinful than in the righteous.

The storming of the Ark is one of Noah‘s great scenes.

The controversy about Noah will sustain it through the opening week or so, and then it will have to succeed or fail on its own merits as a movie. There is much to commend this work of art but not enough to inspire an enthusiastic recommendation.  Crowe is a righteous Noah and the entire cast is without sin in the eyes of this critic. It’s a beautiful, sometimes powerful movie with moments of greatness. Unfortunately, it challenges the viewer to thoughtfulness and then fails to rise to its own challenge. 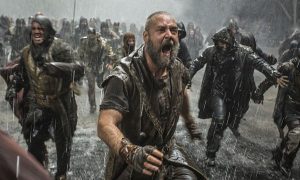 A great biblical story is a narrative symphony in the Classical style. Changes of mood and rhythm and dynamics are clear and melodic. Darryl Aronofsky’s Noah is Baroque. A little too heavily ornamented, too complex.

Yes, it’s a stunning cinematic accomplishment, a true epic, but Noah is only intermittently compelling as storytelling. Thrilling and touching in turn, it grabs you — and then lets you go. The biblical gaps are filled with script ambiguities. Unfortunately, all this leave the moviegoer with the impression that the story is dragging between moments when it soars.