Liam Neelson brings a gravitas to the action genre that few other actors can match.  He needed every ounce of it in Non-Stop, both to give real impact to the story’s strengths and distract from its weaknesses.

There’s a scene in which Liam Neelson (as Bill Marks), a besieged air marshal, is in danger of losing his grip on the situation. Abandoning his strong arm intimidation tactics, which may have been carried to the point of becoming counter-productive as police work, he resorts to a pitiable confession in which he bears his soul and his demons. It is an act of desperation to convince the assembled passengers that the flawed man before them was not a deranged rogue cop but all that stands between them and catastrophe, if they would give him their trust. And even then… no guarantees. If it works, it’s a turning point event in the story.

There’s a mysterious crime in progress on board as all involved are hurtling through the lower stratosphere, and at times the outcome is in doubt. Someone is demanding $150 million to be transferred to an off-shore bank account or someone in the plane dies—every twenty minutes. The first proof of the culprit’s seriousness comes like clockwork. The irony of it is interesting but might be a tad implausible but for Neelson’s performance.  Demands and periodic taunts are delivered as text messages and some viewers may find the ensuing scanning of the passengers for portable devices excessive. Others may find it a suspenseful punctuation in the narrative. 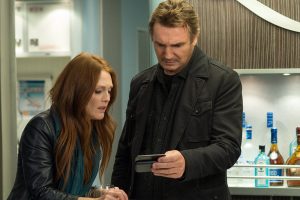 It must be said that Non-Stop contains some real who-done-it and who’s-doing-it suspense.  Suspects are not in short supply and it will keep you guessing.

Corel Stool continues to show why he’s in such high demand as an actor with his portrayal of the off-duty NYPD cop, Austin Reilly, who pulls off the neat trick of enhancing the suspense while simultaneously driving the action.

Julianne Moore is Jen Summers, the attractive lady who asks to change seats with the passenger next to marshal Marks because she likes the window seat. Or does she have other motives…

There’s Dr. Fahim Nasir, who’s a little too active with his cell phone just at the moments when marshal Marks is receiving texts from the bad guy.

Let not forget the computer whiz, the flight attendants and the pilot, who all at one time or another are reasonable suspects.

Non-Stop doesn’t rise to Neelson’s best recent action films, such as Taken and The Grey, but it has its moments and Neelson and Stool are good throughout.

Discovering the “who” and the “how” are great fun. It’s the controversial “why” that left me feeling more than a little bit deflated and disappointed on a couple of levels. You will have to decide for yourself if this “why” is a fatal flaw is or just something of a puzzling dud as an ending.

Can you recognise a famous film by looking at it on a map?