THIS is more like the Von Trier I have come to know in recent years. Nymphomaniac: Vol II is awful. I’m not going to be coy about it. It contains all of the worst traits of the writer-director, and proves to be even more disappointing after the decent start made by the first volume.

The movie begins straight away, and the best way to view both volumes is to watch one immediately after the other, with Joe (Charlotte Gainsbourg) continuing to tell her story to Seligman (Stellan Skarsgard). Almost immediately, and continuing on from the very last moments of the first part, the audience is told/shown that the younger Joe (Stacy Martin) went through a pretty rough time when she suddenly found herself unable to orgasm. This isn’t good, and it’s especially awful for a nymphomaniac. Which is why this half of the story focuses on Joe’s quest to rediscover a source of pleasure.

Pretentious, misogynistic, lazy and laughable in its attempts to shock viewers, Nymphomaniac: Vol II really highlights every flaw that Von Trier has been displaying over the past few years, at the very least. The fact that the characters are nothing more than mouthpieces for his own views wouldn’t be so bad if he could cover it up with directorial skill, but he doesn’t. When characters stress important points they do so with the dialogue, despite the fact that so much within volume one was communicated physically. Von Trier even decides to show his heavy-handed approach in the music choices this time around, with “Burning Down The House” playing as Joe sets fire to a car, and a cover of “Hey Joe” playing over the closing credits. Because the film was about someone named Joe, see what he did there? SEE?? Ugh, it’s symptomatic of the whole film, a tiresome, amateur attempt at intellectualism spread out over two hours. 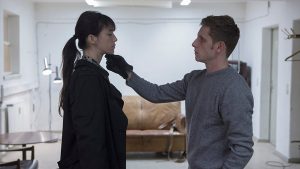 Anyway, to get to the few positives. Although I dislike Charlotte Gainsbourg, for reasons I can’t quite put my finger on, she’s still good in this role, and takes over most of the performance after early scenes featuring Martin. Skarsgard remains as good as ever, and Shia LaBeouf once again comes along to cause pain with his bizarre accent, although he’s not onscreen for long. From the newcomers, Jamie Bell excels as a man who can provide women with a very specialised service, Willem Dafoe is another actor often used by Von Trier who never gives a bad performance, Kate Ashfield does okay with a very small role, and Mia Goth does very well with her role, a young woman who becomes a bit of a protege to Joe.

And that’s me used up my quota of praise. A better director would have been able to do more here, much more, without resorting to content that is supposed to be shocking, I guess. A better director may have even decided to break down elements of Nymphomaniac into a number of different movies that could make for an interesting tapestry (for better examples of certain aspects, check out films such as Secretary, The Piano Teacher and Crash – the Cronenberg movie). Lars von Trier is just not that director. Despite including a coda which I assume he thinks will let him off the hook for everything preceding it, the man ends up revealing more of his own repression and views than any reflections of modern society that he may be trying to capture onscreen. 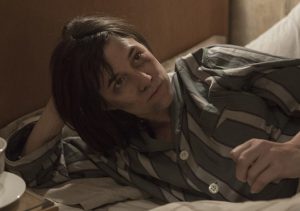 Those who love von Trier will still love him as the end credits roll on his latest audience-baiting work (personally, I was most riled up by the fact that he dared to reference the far superior Haneke film that I just mentioned in the last paragraph). The man will always have his adoring fans. I’ll be busy telling everyone that not only is the emperor not wearing any clothes, but he’s also openly urinating on the commoners clamouring around him.