Mirrors. I’ve never trusted them. Maybe it’s the years that I’ve spent watching horror movies, maybe it’s the fright when I see my own reflection some mornings, but they’ve just always made me slightly edgy. So when I started watching Oculus I knew that it could be an effective horror film for me, as it was all about a haunted mirror.

Directed by Mike Flanagan, who also co-wrote the script with Jeff Howard, this is a feature developed from a 2006 short, Oculus: Chapter 3 – The Man With The Plan. I hadn’t seen that short film, but I had seen Absentia, the previous feature from Flanagan, so that was another plus point.

Karen Gillan plays Kaylie Russell, a young woman who picks up her brother, Tim (Brenton Thwaites), after his release from psychiatric care. Tim has been traumatised from events in his childhood, but he’s all better now. Or so it seems. Kaylie actually tries to convince him that his “cure” has simply removed the truth from his memory, a truth that was too difficult, and improbable, to keep hold of. As the film moves back and forth in time, between the adult Kaylie and Tim and their younger incarnations (played by Annalise Basso and Garrett Ryan), the story of a haunted mirror is revealed. A mirror that took a hold of their parents (Rory Cochrane and Katee Sackhoff). Kaylie has kept track of the mirror for years, has now managed to get hold of it, and has a plan to kill it. But the mirror has a great self-defence system, one that may well push Kaylie and Tim to the edge of sanity. 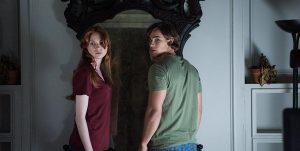 There’s no point in me holding my cards close to my chest here. I liked Oculus. REALLY liked it. In fact, the more I think about it, the more I think that I loved it. It is, in my view, one of the best mainstream horror movies to come out in years. The constant moving between the past and the present, achieved with some fantastically smooth editing, will irritate some people, I’m sure, but I appreciated the fact that it a) allowed the story to be better paced and constantly building tension on two layers, and b) sometimes left me as disorientated as the main characters. It’s a case of form matching content in a way that’s comparable to The Wolf Of Wall Street, and I don’t think I’ll be using that sentence to describe a horror movie in some time. 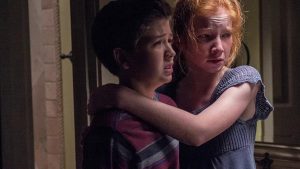 Gillan does well, despite the wobbly accent (which isn’t spot on, but is FAR from the worst I have ever heard), and I really hope that her film career picks up after the success I see coming her way this year. Thwaites is also very good, playing the character who is far less confident and far less committed to fulfilling a promise that the two characters made as children. Basso and Ryan, as those children, also do some great work as their characters become more and more terrified of their parents, thanks to the force emanating from the mirror. In fact, it’s only Cochrane and Sackhoff who fall short, with both overdoing the tics and twitches as their mental states start to crumble. The fault for those off-key performances may lie with Flanagan, but I’m tempted to let him off the hook, considering his great work in the writing and directing department.

With its nice mix of jumps, creepy moments, nastiness and dizzying trickery, Oculus has a bit of something for everyone. Especially people who have never trusted mirrors.