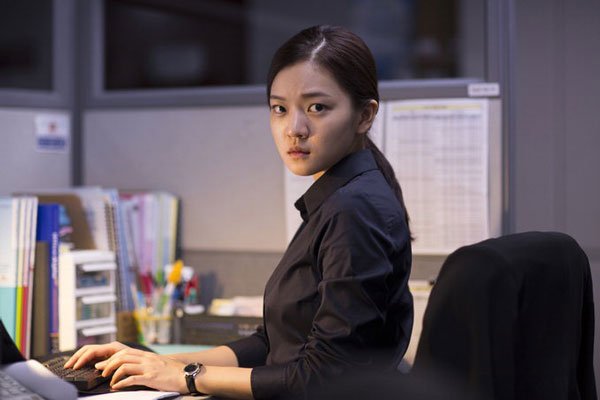 There’s something very creepy about office spaces. The bland conformity takes on a sinister hue after a while. Endless rows of cubicles provide an equally endless supply of hiding places, flickering lights blink off just long enough to allow someone to draw near, and with fully stocked stationary supplies, potentially murderous weaponry is never far from reach. South Korean director Hong Won-Chan gleefully plays with this in Office, a routine slasher that proves rather effective at generating fear.

The two genres South Korean cinema excels at are crime and horror. Both enter the mix here. The film opens with a horrific murder. Kim Byung-Guk (Bae Seong-Woo) returns home and batters his family to death with a hammer. Disappearing from the scene, he quickly becomes the most wanted fugitive in Seoul. The next day, police officer Choi Jong-Hoon (Park Sung-Woong) arrives at the office to interview Kim’s colleagues. It some becomes apparent they are covering something up. Only the intern Lee Mirae (Ko A-Sung) even slightly concedes things might not be what they seem.

What starts out all police procedural shifts when CCTV footage of Kim returning to the office is discovered. There’s no corresponding tape of him leaving. Police forces soon converge to search the building. At least they would if the company hadn’t have threatened legal action, terrified of being associated with the crime. With this slightly incredulous set-up in place, the bodies soon start to stack up, the regularity increased by everyone’s tendency to work late and alone. They all drive themselves so hard I can’t help wondering if the staff might welcome the blessed realise from corporate strategising that comes with a quick knife to the chest. Or rope round the neck. Or tumble from the window.

There’s nothing particularly memorable about the carnage to follow, and the characters, all quickly sketched cut-outs, don’t offer much in the way of a friendly face to root for. Even the final revelation looms into sight far earlier than acceptable. Still, however much it resembles a genre assembly line, Office does provide a healthy dose of entertainment. Hong also throws a few nice touches into the mix to add a little extra spice. The bizarre satisfaction inspired by Kim’s knife pops up on several occasions, and team meetings are livened up by some pretty extreme ranting.