Simple, violent and effective, Olympus Has Fallen feels very much like an “old school” action movie, in the best sense. It is, as you’ve probably already heard, effectively surmised as Die Hard In The Whitehouse, and it even manages to make the familiarity and predictability of the beats an ultimately enjoyable experience. Seriously, if you don’t have this whole movie entirely mapped out in the first 5-10 minutes then shame on you, you need to start checking out every action thriller movie made from the ’80s and ’90s.

Gerard Butler plays tough guy Mike Banning, a man who was once posted as a guard to the President Of The United States (Aaron Eckhart) but has since fallen out of favour. Well, it’s a bit more complicated than that. Banning is still one of the best in his field, but he’s no longer assigned to the White House. That turns out to be a stroke of luck, however, when the White House becomes the scene of a hostile takeover, and the President and his young son (Finley Jacobsen) end up in mortal danger. Banning could just be the man to save them, if he can get in while dodging the gunfire and explosions. 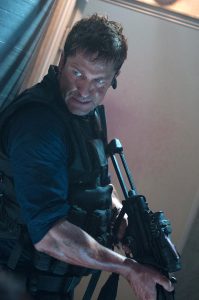 Director Anoine Fuqua may be known for much grittier fare (Training Day and Brooklyn’s Finest always come to mind, as well as Tears Of The Sun), but he has the ability to take that gritty essence and polish everything up nicely enough to create some smooth, satisfying action sequences. I also enjoyed Shooter (though there aren’t many people who agree with me on that one) and this is a step up in terms of scope and technical proficiency. Yes, some of the CGI stands out as being a bit clunky, but it all works to serve the story, and is overshadowed by many great moments of more practical danger and damage. I’ve seen some people complain that the action sequences here are all too dark. It’s correct that many of the fights do take place in low lighting, but I think a number of people may have seen this at the cinema, with the constant problem of movies now being projected at light levels lower than required, because I had no problem watching the events unfold and seeing who was beating up who.

The script, by Creighton Rothenberger and Katrin Benedikt, isn’t up there with the best of the action genre, but it does everything it needs to, sketching out the characters and their feelings towards one another. There are one or two decent one-liners, and some fun exchanges, but the focus of the film is always on getting everyone in the right place and making the central premise feel remotely plausible.

Butler is great in the main role. He’s one of my favourite tough guy actors working at the moment, believable without being ridiculously over the top, and I always like to see him get another role like this under his belt. Eckhart and Jacobsen are both very good as the POTUS and POTUS Jr, and Dylan McDermott continues to have the kind of fun onscreen that has seemingly summed up his choice of projects in recent years. Rick Yune is a little bit weak, but does well enough, and the pacing of the film is helped by numerous scenes featuring Angela Bassett, Morgan Freeman, Radha Mitchell and Robert Forster. Then there’s the very small role for Cole Hauser, yet another actor I always enjoy watching.

This is simple stuff, but it’s also very satisfying. I recommend it, without hesitation, to action movie fans. It probably won’t end up being one of your favourites of all time, but it easily does enough to make for an entertaining two hours.