Omar is Hany Abu-Assad’s first film set in Palestinian territory since Paradise Now eight years ago (NYFF 2005). It’s a clean, sharp, chiseled movie, like the look of his handsome and charismatic lead, Adam Bakri, who plays Omar. The issues are not so sharp or clear. In Paradise Now, which also had a stark, definitive look, the two young would be suicide bombing martyrs were muddled about their commitment. This plot is even more tangled. Maybe Omar makes sense if you’re a Palestinian living in the territories. To outsiders it may look like game-playing or confusion. I would look further. Everything is relevant to the world depicted. But despite good acting, accomplished, lean filmmaking, and strong material, Omar feels in some ways contrived. And its boundaries are blurred, as shown by the fact that the Separation Wall Omar keeps scaling to see his girlfriend divides not Arabs from Jews, but Palestinians from Palestinians. 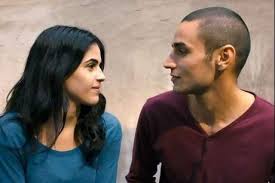 There are four young characters (all first-timers). Omar, the brave one, is in love with Nadia (Leem Lubany), the schoolgirl sister of his activist friend Tarek (Eyad Hourani), the adventurer. Together with the small, young jokester Amjad (Samer Bisharat), the pals plan to shoot an Israeli soldier. One of them makes the plan, another steals the car, and the third has to shoot the soldier. When it’s done, Omar is captured, beaten, tortured, and released into the prison population, where he tells an undercover informant, “I’ll never confess,” which to the Israelis is confession enough. But they want the shooter. So the informant, Agent Rami (Waleed F. Zuaiter) offers to get Omar released. If he can point them to Tarek, who they think held the gun, Omar can avoid jail time.

Omar goes back out, but instead of turning in Tarek gets involved in another action he plans to ambush soldiers in a cafe. This goes awry, though, showing that someone is betraying them. Omar is connected with his friends, Nadia, her family. Who is it? Strangely enough, Agent Rami sticks his neck out, so he says, to get Omar released one more time, with a second chance to turn in Tarek. 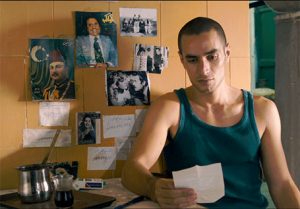 Now because Omar has been in jail, the community begins to suspect him. Eventually that includes Nadia. Indeed Omar has made a promise to Agent Rami. Is the latter Israeli or Arab? One scene makes that confusing, but may be meant to show how good Israelis are at posing as Palestinians. Finally, it comes out who the opportunist has been. Omar winds up at a dead end, left with nothing but a choice between complicity or a desperate act.

Acting is good, from experienced pro Waleed F. Zuaiter (also producer) on down, particularly the sensitive-faced lead, who as Abu-Assad says, “jumps off the screen.” The way Abu-Assad complicates the web of complicity and suspicion by adding love makes Omarseem almost Shakespearean, but hence also more theatrical — and not at all time-bomb-tense like Paradise Now.. With Omar, this filmmaker has now had the distinction of having two Palestinian films submitted for the Best Foreign Oscar, and Paradise Now was the only Palestinian film actually made a finalist for the award. These are a far cry from the subtle ironies of Elia Suleiman, whose Divine Intervention was the first such submission (2003) I personally wonder if “freedom fighter” AKA “terrorist” acts might be the wrong material for Palestinians to submit, and if the joint Israeli-Palestinian film Ajami (Israeli’s 2009 Best Foreign Oscar nominee) isn’t a more rounded and human cinematic depiction of the brutal, chaotic world Palestinians live in. 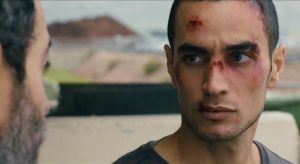 Omar debuted at Cannes (Un Certain Regard; Jury Prize), and was screened for this review as part of the New York Film Festival at Lincoln Center.

The Truth About Time Travel