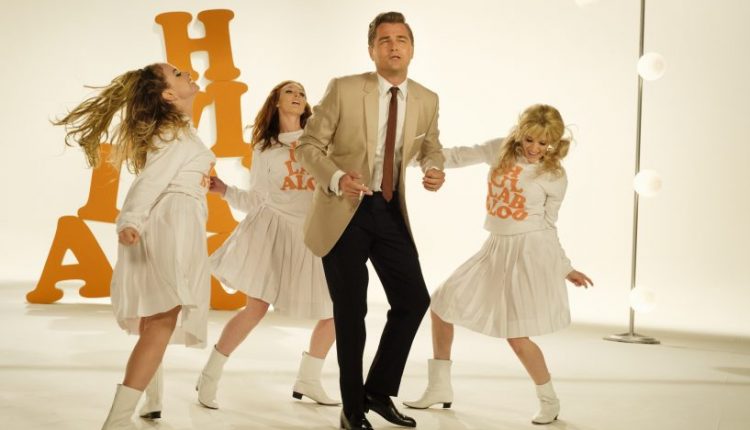 Filmmaker Quentin Tarantino’s filmography is a smorgasbord of eye-rolling wonderment. The designated labels concerning Tarantino’s brand of sensationalistic cinema rolls off the tongue without hesitation: irreverent, hedonistic, risqué, violent, provocative, surreal, experimental, cynical…the list goes on and on. This time around Tarantino spearheads the direction and scripting of his newest observational spectacle that revisits the nostalgic scene of late 60s vintage Tinseltown in all its colorful degradation and defiance. Hence, if any artist can shine a shifty spotlight on the underbelly of Hollywood’s decorative deviance and discomfort then certainly Tarantino’s devilish perception is an automatic given.

Once Upon a Time…in Hollywood finds Tarantino’s creative juices retroactively channeling the poisonous pulse of Los Angeles five decades ago in 1969. Brash, intuitive, off-kilter and curious, Tarantino’s offbeat gem is as much acidic and roguishly compelling as his previous crowd-pleasers that range from the dynamic crime noir Pulp Fiction to the cockeyed commentary in Inglorious Basterds. As with other Tarantino-directed treasures, Once Upon a Time…in Hollywood refreshingly stimulates and stuns as the weaving storytelling unfolds in unconventional rhythms. The knack for parlaying playful platitudes and projecting piercing realities have always been a flavored forte in Tarantino’s polarizing playbook.

There have been countless films over the decades that have tried to skewer Hollywood in all its seediness and senselessness. However, Once Upon a Time…in Hollywood never fails in delving into the commonplace confines of Hollywood’s cliched calculations of absurdity. Instead, Tarantino manages to carve his own unique niche into the lingering digressions that befall his topsy-turvy late sixties L.A. universe in the glitzy landscape of polished pretend entertainment. Famously, Once Upon a Time…in Hollywood is the maverick moviemaker’s ninth film and the promises of golden dreams and film industry acknowledgment are infectiously realized in this smirky and sly showcase of underlying transgressions.

Leonardo DiCaprio (from Tarantino’s “Django Unchained”) plays Rick Dalton, an ex 1950’s movie star whose fading career has been spent on the boob tube in a black-and-white TV western called Bounty Law. Now that Rick’s television career is well behind him the strain of searching for more on-camera work is quite evident. Rick’s alcoholism is the main factor contributing to his dwindling stardom. Thank goodness Rick has his buddy Cliff Booth (Brad Pitt from Tarantino’s “Inglorious Basterds”) by his side. Cliff’s backstory is that he used to be Rick’s stunt double on his western series. Cliff’s function right now is to serve as Rick’s glorified chauffeur and personal assistant. Sadly, Cliff has his own personalized demons independent of Rick’s professional woes.

Thus, Rick and Cliff make the desperate rounds trying to land a TV gig that would dare to have them sign on the dotted line. However, whereas Rick and Cliff are struggling to hang on to their vanishing careers in showbiz their neighbors in rising actress Sharon Tate (“I, Tonya’s” Margot Robbie) and her filmmaker hubby Roman Polanski (Rafal Zawierucha) are in comparison feeling their limelight heating up. Rarely do the guys run into this upcoming hotshot Hollywood couple but the sting still hurts to know that the curvaceous starlet is chasing and claiming what Rick formerly had slip away from him–the embracing of celebrity notoriety.

Naturally, Tarantino allows the audience–the majority of them that are well aware of what would ultimately be one of the most devastating Hollywood tragedies to haunt the L.A. landscape concerning the murdered pretty performer–to witness the stunning golden girl appeal of the heralded sexpot Tate as juxtaposed to the sinking scrapings of one-time “It phenom” Dalton. This is a haunting reminder that the unpredictable sphere of Hollywood’s glory-based adulation is not immune to the trappings of grim consequences measured by the degree of disillusionment.

When Tarantino sets his sights on August 1969 the nefarious vibes of anxiety hits instinctively. Worshipping hippies. A deranged cult leader named Charles Manson (Damon Herriman) that oversees these said detached worshipping hippies. Now let us conclude the terrible trajectory of Hollywood’s blessing for the soon-to-be doomed Ms. Tate as contrasted to the slings and arrows of Mr. Dalton’s career-related misfortunes?

Once Upon a Time…in Hollywood is tactfully methodical in its resourceful delivery of typical Tarantino-esque flourishes highlighted by adventurous dialogue, meandering sequences that are welcoming in bewilderment, the inclusion of nostalgic-driven fixtures in fashion and forethought, and cheapened bawdy goings-on to support the peppered proceedings. With the film’s enormous running time one might question what motivation Tarantino had for ushering this manufactured marathon of madness in Hollywood’s secluded bubble? Still, who cares? The assembly of an all-star cast of leads and supporting players on their game marching to the beat of Tarantino’s off-the-cuff artistry should suffice for the hardcore fans of the edgy auteur’s manic vision.

In the roving eyes of Tarantino, the conception of old-time Hollywood (and its contemporary standing of gloss and gumption) is much like his branding of cinema–a high-wire act without the comfort of a convenient safety net.