Only the Brave (2017) is a “based on a true story” film.  This description can often put people off; they ask questions such as: how true is the film?  Does it lend itself to being entertaining?  Do the actors detract from the story?  Even more so; it is based on a GQ article entitled, “No Exit” by Sean Flynn.  So, at it’s heart, Only the Brave is an American biographical drama film (stick with it…) which follows the story of the Granite Mountain Hotshots, an elite crew of firefighters and their exploits leading up to the infamous Yarnell Hill fire in June 2013. 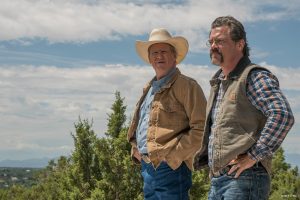 This is up there with the great fire-featuring films: Backdraft (1991), Ladder 49 (2004) and The Towering Inferno (1974) for a multitude of reasons and is therefore a film you should watch. If you like biographical pieces.  And if you like films about fires (and dramas). Only the Brave enlists the talents of heavy-weight actors Josh Brolin (Eric Marsh), Jeff Bridges (Duane Steinbrink) and Andie MacDowell (Marvel Steinbrink) who all act suitably well – they are likable characters who you feel respect the original heroes. Another smooth point is the flow of the story.  It doesn’t beat around the bush – you get to very quickly understand the characters each portrays. 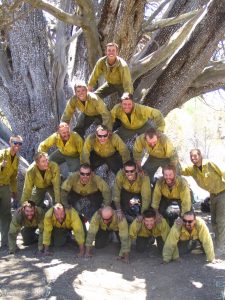 Over the course of the movie, you get to learn plenty of things about the firefighters – you see them train, socialise and even raise a baby.  It is moments like these which showcase the camaraderie between the group.  You feel their sense of pride at becoming Hotshots – those you might call the “A-team” who deal with the fire directly.  One sub-plot revolves around Brendan McDonough – an ex-addict wanting to do right by a daughter he isn’t allowed to see – the transformation of him is fantastic, as well as seeing the ribbing he gets from the other crew-members.

This is up there with the great fire-featuring films

Researching the film’s truth reveals a mostly accurate use of facts of the event but at the moment of lost-contact (as you would expect) some creative liberties is taken. That’s something the film does well – it makes you want to learn more about the tragedy. Furthermore, it ensures you feel the power, emotion and danger throughout  – whether it be a falling tree, rogue fire or just an arguement, Only the Brave will never leave you bored.

As good as the film is, it isn’t perfect. But only just. Aside from the main few characters – Marsh, Steinbrink, Brendan McDonough (played by Miles Teller) who you really get to know – the rest of the Hotshots are unremarkable and hard to tell apart.  Because of this, the final scene – the great dramatic event which the situation is most famous for – seems to have less impact. At times, the movie has text flash up, but because of the choice of colour (a bright green) it is borderline-impossible to see and you either have to pause or rewind – not the greatest for keeping you in the moment. 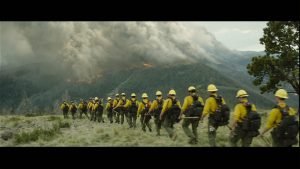 Only the Brave succeeds in what it sets out to achieve: director Joseph Kosinski does a remarkable job of not sensationalising what could easily have just been an action-fire movie.  You leave the film realising what an incredible job these heroes do, all that they achieve and what they risk their lives for. Only the Brave honors the fallen 19 throughout so admirably well and pays respect by showing you the real-life counterparts alongside those actors who played them. During this montage it’s hard not to shed a tear or dwell on their remarkably brave outlook on life.

Only the Brave is available on Blu-ray and DVD now.