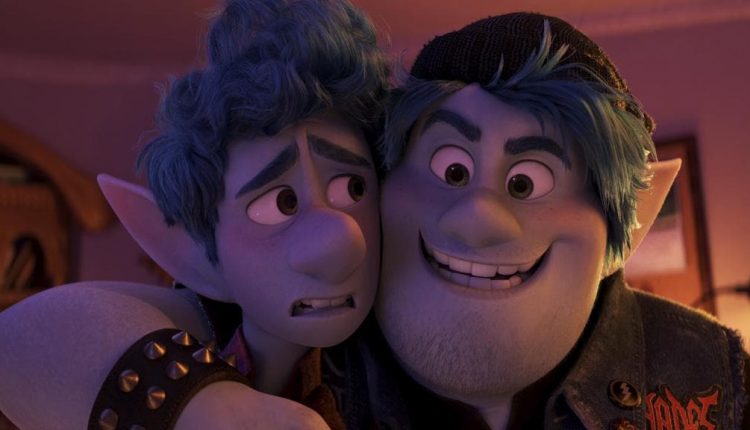 Onward is another ambitious family-friendly entertainment to emerge out of the Pixar/Disney animation studio and it certainly has a lot to say about these current times of cynicism. From a brotherly tandem dealing with daddy-related issues to the hinting of tolerance (a gay traffic cop courtesy of Lena Waithe’s character Specter is included) Onward is speculative in its whimsy concoction as an increasingly impish supernatural gem that offers charm and treasured wizardly at its escapist core. Although not the most ground-breaking fairytale fable to come from Pixar/Disney’s flavored factory of colorful creation it is still an engaging spectacle for youngsters and oldsters alike.

Director Dan Scanlon (“Monsters University”) develops a playful landscape worthy of the trademark opulence associated with the notable Pixar brand regarding the top-notch flourishes of high-grade animation to match its magical, tender story about the need for curiosity and belonging. Naturally, the kiddies will get a kick out of the high-wire adventures that feature such enticing optics as roguish dragons, brotherly bonding, hocus-pocus high jinks, and the overall anticipation of the unknown. Indeed, Onward may not be as concrete and capable in realizing its frothy potential but it is sustainable because it is family fodder that has heart and insight.

The fantasy world imagined in Onward is surreal to say the least. The setting boasts all sorts of eye-popping personalities and creatures–elves, fairies, trolls, the aforementioned dragons and other peculiar beasts, etc. Still, this fantasy world does include modern-day technology so observing pushy unicorns and downloading images on a high-speed laptop would not be considered as oddities existing in the same universe. Nevertheless, this is an America that is positioned in head-scratching wonderment. Go figure.

At the center of the bedazzling excitement are green-haired teen sibling elves Barley and Ian Lightfoot (voiced by “Avengers: Endgame’s” Chris Pratt and “Spider-Man: Far From Home’s” Tom Holland). Older brother Barley and Ian are fatherless but have the support and guidance of their mother Laurel (voiced by Julia Louis-Dreyfus, “Downhill”). Unfortunately, the brothers’ undercover wizard father Wilden (Kyle Bornheimer) died when they were young so Daddy Dearest is more so a mystery to them. Soon, Laurel will try to shed some light on the boys’ late father Wilden when that special occasion arrives.

Thankfully, that special occasion does arrive in the form of Ian’s 16th birthday when his mother bestows upon him a mysterious magical wizard staff that his deceased father Wilden wanted him to possess when the time was right to do so. Suddenly, Ian has the power at his fingertips to do something considered unimaginable–the ability to bring back to life their missing father from the majestic afterlife. However, there is one stipulation in the instructions in order to complete this mission to be reunited with their absent dead father as both Ian and Barley have to embark on an assorted adventure to carry things out accordingly and find an artifact that compliments the staff . Thus, the wondrous quest begins for the elf brothers to discover what it takes to reach out to daddy Wilden while realizing their own empowerment at stake.

Time is of the essence and the rare artifact that the brothers must recover within a 24-hour period could result in disaster for Wilden’s return if it is not located on a timely basis. It certainly does not help at all that Ian and Barley must contend with the wicked-minded villainous Manticore (Oscar winner Octavia Spencer) as they try to save what is left of their father’s imagery before the spell wears off.

Pleasant and sweetly ponderous, Onward is a welcomed distraction as it spryly invites us into a wacky utopia that only the resourceful artistry of Pixar/Disney can provide in a panicky time where the real world is an ominous playground for homebound restrictions among other global concerns. Sure, one can easily spot the Harry Potter leanings from a mile away but hey…this has not prevented other rip-offs concerning the world famous boy wizard, correct? Holland’s Ian is practical and inquisitive and certainly serves as a distinctive counterpart to Pratt’s oafish comic wonder Barley as he loosely spoofs the Dungeons and Dragons crowd.

There have been deeper and more meaningful Pixar flicks that explored its sensitive yet frolicking themes with better heft. Onward, without a doubt, sets its own considerable standard in an otherwise preferrable path of youth-oriented redemption.