It was obvious that Kitano’s previous Yakuza gangster film Outrage, to which this is a sequel, was ideal watching for a select few only, so it’s hard to see why critics are lamenting its lack of wider appeal. There is a complaint that Kitano’s previous set of films (not released in the US, such as the 2010 conceptual exercise Achilles and the Tortoise) were ridiculously self-indulgent; some of his earlier ones that were admired, such as Sonatine, Fireworks and Brother in part risk that comment. Yet there is the complaint that what he does lately is only trying to give his audience what he thinks they want. This is unfair. In their rigorously narrow way, these latest movies, which achieve a pure Zen of formal, brutal gangsterism, are works of art of the purest sort, and he must want this too.This is a world of ritual as Japanese as the tea ceremony. Older men in dark suits are bowed to by younger suited underlings with near-military politeness. These hotshots are chauffeured around in shiny black luxury cars and are seen in interiors as exquisitely tasteful whether ultra-modern or very traditional. They are very like high-level business executives, whether or not this is deemed adequately satirical or metaphorical, or Godfather II-like. Again the Japanese auteur has done a thing and done it well. Again there is the mix of elegant interiors, dry corporate-style meetings enlivened by screaming and beatings, assured editing, and understated sequences of nonetheless extreme violence. The latter has new variations. (This sequel is neither more nor less violent, just differently so.) A man is slowly killed through the use of a baseball pitching machine set to hit him in the face. Another gets a power drill to the head. Two twists have been added to characters from Outrage. Kitano’s, Ôtomo, is not dead. After all, it turns out, he survived the stabbing he got in prison after carving an X with a razor over the face of rival Kimura (Hideo Nakano). His demise was just a rumour created by Detectuve Kataoka (Fumiyo Kohinata). And Kataoka this time is not a dirty cop, as in Outrage. He’s been pretending to be one to manipulate the Yakuza gangs. Now he is going to make the allied Sanno and Hanabishi clans, which are allied, destroy each other by creating enmity, primarily by undermining the authority of their new chief. As Mike D’Angelo writes in The Dissolve, Beyond Outrage “brings gory new meaning to the phrase ‘hostile takeover.'” Kataoka has done some nifty manipulating. But he’s playing a dangerous game. He cannot possibly win.

Beyond Outrage makes Kataoka the pivot-point. Let’s remember that Kitano began as a comic, and that there are always droll elements in his films. (Asian film expert Derek Elley classifies this as a “contemporary black crime comedy.”) A minor one is that Kataoka, with his perpetually smiling face, is saddled with a sad-sack, grimacing partner, Detective Shigeta (Yutaka Matsushige), whom Kataoka mocks for his naivete, and who never seems with it, never ready to cooparate, or “get” what’s going on. And there is a beautiful irony in the abrupt end to which Kataoka comes, in a scene from which Shigeta has just discretely and wisely withdrawn. For a while Kataoka does manipulate things, but the underlying truth is that nobody wins here.

Another bit of drollery is the pair of young Yakuza-offspring fuckups Ôtomo is saddled with as “bodyguards” as a kind gesture when Kataoka arranges his early release from prison. They, like a geisha, it would be terrible bad members to decline. But they are goofballs, firecrackers who stand out and know nothing, and they are doomed. Like the naked woman in Outrage, their beaten but youthful corpses, naked and adorned with a first sprinkling of Yakuza tattoos, are prettily displayed in death a little later. (One of the pleasures of Beyond Outrage is the way it rhymes with its predecessor.)

Again there has been a change of leadership, and Kato (Tomokazu Miura) is a clan’s new Chairman. But his younger underboss, an economic manager Ishihara (Ryô Kase), skinny, dressed in flashier, less tasteful suits, is a preening peacock who boasts he is the wave of the future with his knowledge of hedge funds, and this new pair offends the old guard. On the other hand, despite the declaration in Outrage that chopped-off fingers are becoming passé, they so much remain that with a knife not ready at hand, a man bites off the end of his own pinky to show his readiness to go all the way. Some rituals are just too good not to survive. 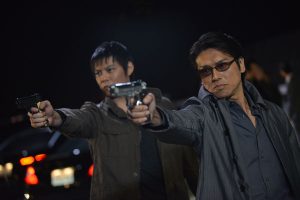 True, slow-moving discussion-exposition sequences may seem to alternate too rarely with hot action scenes, but things heat up considerably in the last third. Many of the actors display their most refined histrionic skills to good effect, but Kitano himself, writer-director-star as before, with his grimly Keatonesque deadpan and his sense of being a killing machine that’s Clint Eastwood on steroids and indifferent to formalities and facades, holds the screen like nobody else. Much credit also is due to the color, widescreen and carefully underlit camera work of Katsumi Yanagijima; the elegant, balanced production design of Norihiro Isoda and set decoration of Hirohige Shibata. This is a crack, practiced team.